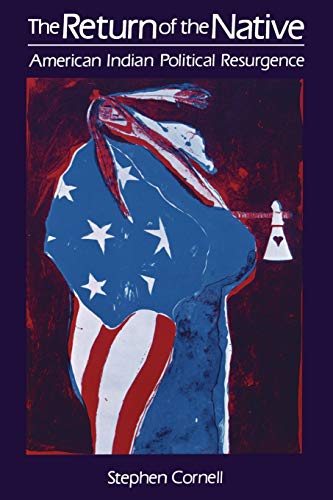 The Return of the Native
by Stephen Cornell

The Return of the Native Summary

The Return of the Native: American Indian Political Resurgence by Stephen Cornell

An incisive look at American Indian and Euro-American relations from the seventeenth century to the present, this book focuses on how such relations-and Indian responses to them-have shaped contemporary Indian political fortunes. Cornell shows how, in the early days of colonization, Indians were able to maintain their nationhood by playing off the competing European powers; and how the American Revolution and westward expansion eventually caused Native Americans to lose their land, social cohesion, and economic independence. The final part of the book recounts the slow, steady reemergence of American Indian political power and identity, evidenced by militant political activism in the 1960s and early 1970s. By paying particular attention to the evolution of Indian groups as collective actors and to changes over time in Indian political opportunities and their capacities to act on those opportunities, Cornell traces the Indian path from power to powerlessness and back to power again.

The Return of the Native Reviews

It should be required reading for all students of Indian and white relations. * Journal of American Ethnic History *
Important and ambitious....Interesting, broad, and engaging. It promises an understanding of a relatively unexamined, evocative, and both tragic and heroic province of American ethnic diversity and political mobilization. * American Journal of Sociology *
An excellent work that adroitly handles an exceedingly complex subject. * C. Matthew Snipp, University of Wisconsin-Madison *
A fascinating overview of early American Indian relations, specifically, how the tribes lost land, independence, and power, but * by playing one official body off another *
Well written and persuasively argued, this book will be of great interest to students and scholars in the social sciences and to discerning general readers. * Choice *
A cogent analysis of the efforts of generations of native peoples to regain some measure of control over their own lives, community resources, and futures....Highly recommended. * Minnesota History *
With interpretive subtlety and analytical power, Cornell traces the active responses of American Indians to Euro-American power. His book combines historic scope and anthropological depth. It speaks at once to social scientists and the educated public * to all who would better understand the dynamics of ethnicity. *
Without a doubt this book is the most comprehensive and systematically argued study of the formation of Native American supratribal identity and resultant political action. Cornell presents a clear, logical and sensitive analysis of changing Native American political conditions that are the outcome of struggles between the goals and opportunities of the Native American groups and powerful forces of structural domination. Here is a significant contribution to the study of the politicization of ethnic identity and political mobilization among subordinated groups. * Duane Champagne, University of California, Los Angeles *
An informative, stimulating account of the vicissitudes of the relations between American Indians and the peoples who invaded their territories....The account is told with grace and wit. * Humanity & Society *
Excellent book * one of the best, theoretically and historically, to come out in recent years. *
Cornell formulates a working hypothesis to explain the historical changes in Indian-white relations in the United States...one of the best suggestions of a theoretical framework in American Indian politics since Robert K. Thomas introduced his hypothesis about domestic colonialism and powerless politics in the mid-1960s....Cornell's argument is sound and his thinking provocative. The Return of the Native is a valuable addition to the literature on American Indian-white relations and on colonialism in general. * The Western Historical Quarterly *
This is the finest, most comprehensive text on 20th Century Native Americans in print...The text is scholarly, readable, and reliable in its documentation. * Roxanne Dunbar Ortiz, California State University *

GOR010094706
The Return of the Native: American Indian Political Resurgence by Stephen Cornell
Stephen Cornell
Used - Good
Paperback
Oxford University Press Inc
1990-07-19
288
0195065751
9780195065756
N/A
Book picture is for illustrative purposes only, actual binding, cover or edition may vary.
This is a used book - there is no escaping the fact it has been read by someone else and it will show signs of wear and previous use. Overall we expect it to be in very good condition, but if you are not entirely satisfied please get in touch with us.