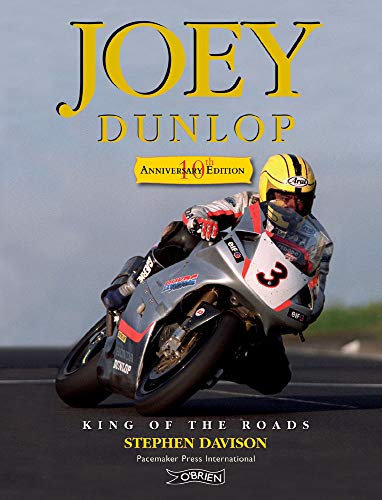 10th Anniversary Edition, updated throughout with 16 new pages. Captures Joey in action, his triumphant racing moments, with his family, on his relief missions to Romania. A fitting record of one of the greatest motorcyclists the sport has ever seen.

Joey Dunlop: King of the Roads by Stephen Davison

The updated, tenth-anniversary edition of Joey Dunlop, King of the Roads - packed with new material, including a new introduction by Stephen Davison, a new chapter on the legacy of Joey Dunlop and previously unpublished photographs.

Joey Dunlop's racing career began in 1969, and his yellow helmet and number 3 bike quickly became synonymous with high-octane wins. He was one of the most exciting riders the sport has ever seen, drawing huge crowds to the Isle of Man TT races and to every other course he raced. Joey received an MBE for his motorcycling prowess; his racing record remains unsurpassed: twenty-six wins in twenty-five years at the TT races, and five times World Champion.

On 2 July 2000 the forty-eight-year-old rider crashed during a race in the republic of Estonia. The death of Joey Dunlop triggered an unparalleled emotional response as the sporting world and his fans openly mourned his passing. A decade after his death Joey Dunlop is still revered as a motorcycling legend. He will not be forgotten Joey Dunlop tenth-anniversary edition looks at Joey Dunlop's legacy and captures the rider, the family man, the winner, the humanitarian - the person behind the legend that is the 'King of the Roads'.

'a tremendous empathy with bike racers'

'a glowing tribute ... from an ardent fan'