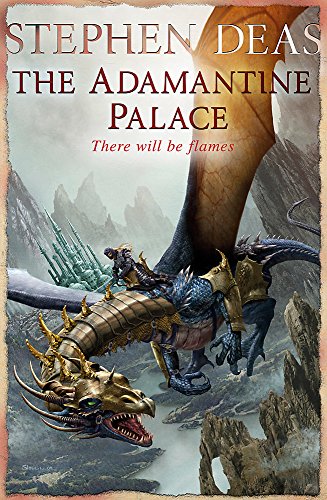 The Adamantine Palace
by Stephen Deas

The Adamantine Palace by Stephen Deas

The Adamantine Palace lies at the centre of an empire that grew out of ashes. Once dragons ruled the world and man was little more than prey. Then a way of subduing the dragons through alchemy was discovered and now the dragons are bred to be mere mounts for knights and highly valued tokens in the diplomatic power-players that underpin the rule of the competing aristocratic houses. The Empire has grown fat.

But unknown to him there are flames on the way. A single dragon has gone missing. And even one dragon on the loose, unsubdued and returned to its full intelligence, its full fury, could spell disaster for the Empire.

But because of the actions of one unscrupulous mercenary the rivals for the throne could soon be facing hundreds of dragons ...

Stephen Deas has written a fast moving and action-fuelled fantasy laced with irony, a razor sharp way with characters, dialogue to die for and dragons to die by.

Stephen Deas was born in 1968. He once set fire to Wales. Well one bit of Wales. Twice. When not burning principalities, he played too much Dungeons and Dragons. Despite this he managed to study theoretical physics at Cambridge, get a job at BAE, marry and have two children. He now lives in Essex.

GOR001681582
The Adamantine Palace by Stephen Deas
Stephen Deas
Used - Very Good
Paperback
Orion Publishing Co
2010-02-01
400
0575083751
9780575083752
N/A
Book picture is for illustrative purposes only, actual binding, cover or edition may vary.
This is a used book - there is no escaping the fact it has been read by someone else and it will show signs of wear and previous use. Overall we expect it to be in very good condition, but if you are not entirely satisfied please get in touch with us.