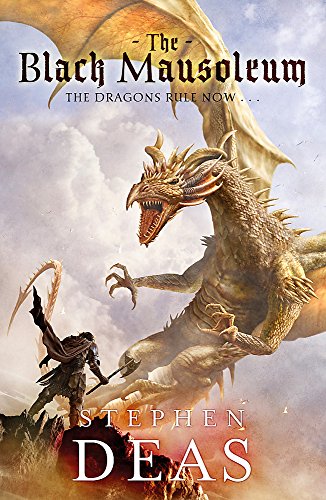 The Black Mausoleum
by Stephen Deas

Out of Stock
$28.49
inc. GST
A desperate quest to save a burning world - Stephen Deas returns to the world of his epic dragon trilogy.
Like New
Only 0 left

The Black Mausoleum by Stephen Deas

Two years have passed since the events of The Order of the Scales. Across the realms, dragons are still hatching. Hatching, and hatching free.

Skorl is an Ember, a soldier trained from birth to fight dragons. He is a living weapon, one-shot only, saturated with enough dragon-poison to bring down a monster all on his own. Misanthrope, violent and a drunk, to fulfil his purpose and slay a dragon, means to be eaten. Now Skorl has a choice: he can hang for his crimes, or he can go with the last of the Adamantine Men, fighting against an enemy he was born to face.

Rat is an Outsider. He's on the run and he's stumbled onto something that's going to make him rich beyond all his dreams. It's just a shame that the end of the world has started without him.

Two men, one woman. One chance to save the world from a storm of dragons ...

Stephen Deas was born in 1968. He once set fire to Wales. Well one bit of Wales. Twice. When not burning principalities, he played too much Dungeons and Dragons. Despite this he managed to study theoretical physics at Cambridge, get a job at BAE, marry and have two children. He now lives in Essex. With THE ADAMANTINE PALACE he returned to his first love; that of setting fire to things.

GOR010397252
The Black Mausoleum by Stephen Deas
Stephen Deas
Used - Like New
Paperback
Orion Publishing Co
2012-05-15
368
0575100494
9780575100497
N/A
Book picture is for illustrative purposes only, actual binding, cover or edition may vary.
The book has been read, but looks new. The book cover has no visible wear, and the dust jacket is included if applicable. No missing or damaged pages, no tears, possible very minimal creasing, no underlining or highlighting of text, and no writing in the margins.