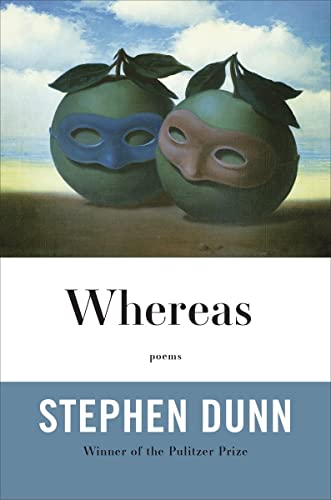 Whereas
by Stephen Dunn

Out of Stock
$25.99
inc. GST
Pulitzer Prize winner Stephen Dunn examines the difficulties of telling the truth, and the fictions with which we choose to live.
Very Good
Only 0 left

Whereas: Poems by Stephen Dunn

Incisively capturing the oddities of our logic and the whimsies of our reason, the poems in Whereas show there is always another side to a story. With graceful rhythm and equal parts humor and seriousness, Stephen Dunn considers the superstition and sophistry embedded in everyday life: household objects that seem to turn against us, the search for meaning in the barrage of daily news, the surprising confessions between neighbors across a row of hedges. Finding beauty in the ordinary, this collection affirms the absurdity of making affirmations, allowing room for more rethinking, reflection, revision, prayer, and magic in the world.

"A bold and elegant conversation with wisdom itself. . . . A complex guidebook to contemporary life. These poems explore life's contradictions and mysteries while creating light from the dark spaces of death and doubt. . . . Triumphant." -- The Journal
"Dunn takes aim at everything, especially our search for meaning in a culture of posttruth and too much news, some of it skewed. He does so with humor, wit, and a dose of gravitas, grasping detail and nuance. . . A timely and necessary addition." -- Library Journal (Starred)
"Incisively capturing the oddities of logic and whimsies of reason, Pulitzer Prize-winner Dunn considers with grace, humor, and gravity the superstition and sophistry embedded in everyday life." -- Publishers Weekly
"Stephen Dunn has long known how to begin a poem so it sounds like part of a conversation, how to move the poem along by following its own curiosities, and how to deliver just enough wisdom at the end. He's still doing it all right here, better than ever, in this fresh new collection." -- Billy Collins
"Occasionally one of our best poets gets even better. In Whereas, Stephen Dunn tells the truth about lying and (perhaps) tells lies about what constitutes truth. No one else uses abstraction as affectively or as wisely. No one else uses humor with such devastating charm. Dunn negotiates the labyrinthine simplicities that deepen our lives with deft maneuverings and always surprising clarity." -- Michael Waters
"There's a deep and reliable honesty that drives these poems, a kind of courageous revelation not of old wounds and losses, but of something like the-way-things-are. That the poems manage this kind of transmission of (no other word for it) truth, and make that truth so much a delight to hear-well, that's what Stephen Dunn has been doing all his writing life. That's why his poems have been, and remain, indispensable." -- Robert Wrigley

Stephen Dunn is the author of nineteen poetry collections, including the Pulitzer Prize-winning Different Hours, and was a finalist for the National Book Critics Circle Award and the recipient of an Academy Award for Literature. His poems have appeared in The New Yorker, Atlantic, and American Poetry Review, among many other publications. A distinguished professor emeritus at Richard Stockton University, he lives in Frostburg, Maryland.

GOR009732686
Whereas: Poems by Stephen Dunn
Stephen Dunn
Used - Very Good
Hardback
WW Norton & Co
2017-02-16
80
0393254674
9780393254679
N/A
Book picture is for illustrative purposes only, actual binding, cover or edition may vary.
This is a used book - there is no escaping the fact it has been read by someone else and it will show signs of wear and previous use. Overall we expect it to be in very good condition, but if you are not entirely satisfied please get in touch with us.