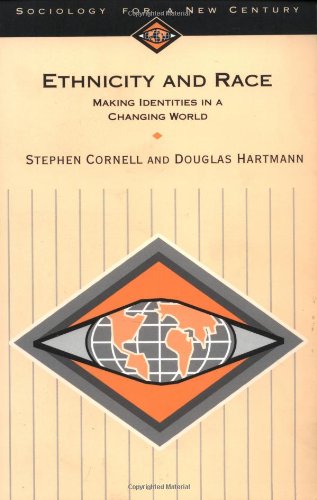 Ethnicity and Race: Making Identities in a Changing World by Stephen E. Cornell

This cross-cultural and cross-national approach to ethnicity and race analyzes how race and ethnic identities are socially constructed, institutionalized and maintained. Throughout, the authors use contemporary examples from across the world, including extended case studies of ethnic/identity construction in the former Yugoslavia, South Africa and New Zealand.

The authors demonstrate why ethnic and racial boundaries - over the last 30 years and contrary to earlier, optimistic predictions - have become stronger and more strident under the pressures of modernization, mass communication and secularization. The book concludes by discussing how the downward spiral of hate and separateness can be halted, even reversed.

Stephen Cornell is professor of sociology and of public administration and policy at The University of Arizona, where he also directs the Udall Center for Studies in Public Policy. His Ph.D. is from the University of Chicago. He taught at Harvard University for nine years and at the University of California, San Diego for nine more before joining the Arizona faculty in 1998. He has written widely on ethnicity and race and on issues involving indigenous peoples in the U.S., Canada, Australia, and New Zealand. Douglas Hartmann (Ph.D. University of California, San Diego, 1997) is Associate Professor of Sociology at the University of Minnesota. Much of his research focuses on the intersections of race and sports in American culture. Hartmann is the author of Race, Culture, and the Revolt of the Black Athlete: The 1968 African American Olympic Protests and Their Aftermath (University of Chicago Press, 2003), and is currently working on a project that uses midnight basketball as a case study of sports-based risk prevention in the contemporary United States. He is also one of the principle investigators of the "American Mosaic Project," an ongoing, multi-method study of race, religion and diversity funded by the Minneapolis-based Edelstein Family Foundation.

GOR002577342
Ethnicity and Race: Making Identities in a Changing World by Stephen E. Cornell
Stephen E. Cornell
Sociology for a New Century Series
Used - Very Good
Paperback
SAGE Publications Inc
1997-09-10
304
0761985018
9780761985013
N/A
Book picture is for illustrative purposes only, actual binding, cover or edition may vary.
This is a used book - there is no escaping the fact it has been read by someone else and it will show signs of wear and previous use. Overall we expect it to be in very good condition, but if you are not entirely satisfied please get in touch with us.