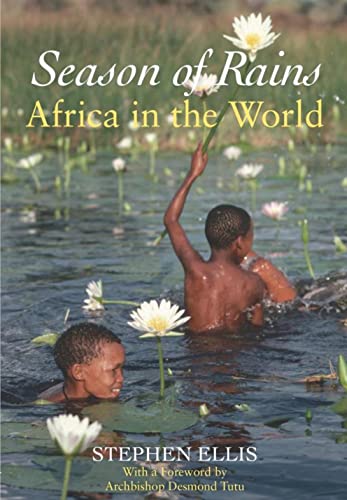 Season of Rains
by Stephen Ellis

Used Price
$35.99
inc. GST
Free Shipping in Australia
Stephen Ellis has written a sweeping new survey of modern Africa that goes beyond the stereotypes. He shines a positive light on Africa's potential in the post-colonial world and highlights its strength in resources. This is a guide to how money, power, religion and indigenous development will shape Africa's coming generations.
Reviews:
Trustpilot
Very Good

Season of Rains: Africa in the World by Stephen Ellis

Most of what is written about Africa is framed in terms that have been out of date for years. Too often, it is seen as heading for either disaster or salvation; the realities are more subtle, more complicated than this binary opposition suggests. The continent has over the last century experienced the fastest population growth in the entire history of our planet. This brings pressures environmental and human, but it also changes the logic of Africa's economics. It suggests reasons for hope. Thanks to mobile phones, African retail markets are now becoming integrated; in South Africa, Nigeria and elsewhere, banking is penetrating society; foreign direct investment is higher than ever before. And Africa has 80 per cent of the world's empty agricultural land, which foreigners covet. Yet there is no reason to believe that Africa is heading for political stability. Its so-called 'failed states' are actually here to stay. After two centuries when Europeans and Americans thought of Africa as a continent struggling to catch up, it has arrived. It has developed, but in ways no one foresaw. Season of Rains explains how one billion Africans are changing their continent and changing the world. Stephen Ellis dissects how the postcolonial legacy has been overcome, how Africans are seizing the commercial and political initiative, and why this matters. Africans are reorienting-literally-as they connect to the East. Hundreds of thousands of Chinese, seeking minerals, oil and more, have settled in Africa; conversely the Chinese city of Guangzhou is home to as many as 100,000 Africans. In a series of short, pungently written chapters, Ellis surveys the continent today, offering the reader an indispensable guide to how money, power, religion and indigenous development will shape Africa's coming generations.

'The timing of [Season of Rains], named after a Cameroonian poem about forecasting the harvest at the first rains, is impeccable. Its publication follows a rash of research celebrating the prospects of an African economic renaissance in years to come, while a combination of global and local circumstances has pushed the continent back up the agenda for the global investment community. - Yet this growing literature on what some like to term a new scramble for Africa, referring back to the colonial carve-up that took place in the 19th century, is often one-dimensional. That is not an accusation that can be levelled at Ellis, who in a succinct 170 pages captures the broad spectrum of political, economic and social foundations that make Africa what it is today.' * Financial Times *
'Nuanced and challenging - Ellis' book will not please readers looking for a simple takeaway of straightforward policy recommendations, but his in-depth knowledge makes it essential reading for anyone seeking to understand Africa's evolution.' * Foreign Affairs *
'This book is a lucid and brief analysis of Africa in the world. It is a subversive masterpiece, undermining stereotypes of and about Africans. Everyone interested in Africa should read it to give their assumptions an invigorating cold shower and to modify their own policies.' - Sir Edward Clay, former British High Commissioner to Kenya, for the Royal African Society 'Season of Rains brilliantly succeeds in its goal of providing a succinct introduction to a continent which is all too often conceived by external observers in stereotypes inherited from the post-colonial period, or indeed much further back in the history of "the dark continent".' * International Affairs *
'[Seasons of Rain] investigate[s] and enrich[es] the intellectual, political and cultural approaches to the African continent, giving substance and structures and offering body to policy-making... in vibrant style, Ellis brings the individual and the global, the personal and the structural, the pre-colonial and the aftermath of the "true postcolonial age" together.' * The Round Table *
'One of the most insightful and thought-provoking analyses of Africa of the last decade. Stephen Ellis mercilessly exposes the outdated preconceptions that mould outsiders' interactions with the continent and the yawning gap between what statesmen, diplomats and aid officials would like the continent to be and what it really is. His conclusion is refreshingly upbeat.' * Michela Wrong, author of It's Our Turn to Eat: The Story of a Kenyan Whistleblower *
'An outstanding, original and provocative work. - The breadth of Season of Rains is extremely impressive. - its greatest strength is the way it manages to convey a sense of both continuity and change. - a considerable achievement'. * Dr Daniel Branch, University of Warwick *

Stephen Ellis is the author of groundbreaking books on the ANC, the Liberian Civil War, religion and politics in Africa and the history of Madagascar, and Professor of Social Sciences at the Free University, Amsterdam.

GOR005805074
Season of Rains: Africa in the World by Stephen Ellis
Stephen Ellis
Used - Very Good
Paperback
C Hurst & Co Publishers Ltd
2011-11-10
232
1849041806
9781849041805
N/A
Book picture is for illustrative purposes only, actual binding, cover or edition may vary.
This is a used book - there is no escaping the fact it has been read by someone else and it will show signs of wear and previous use. Overall we expect it to be in very good condition, but if you are not entirely satisfied please get in touch with us.