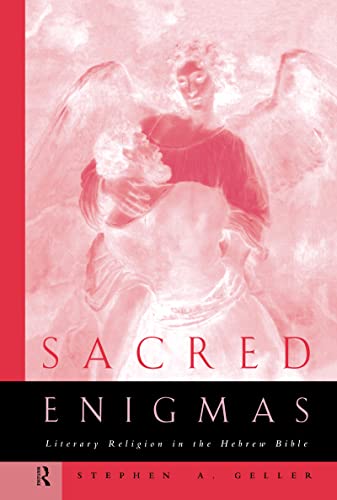 In Stock
$47.99
+10% GST
This volume assesses the religious and intellectual significance of the Hebrew bible both as a document of its time and as an important step in the development of thought. It presents the major aspects of biblical religion through detailed literary analyses of key texts.
Very Good
Only 1 left

Sacred Enigmas assesses the religious and intellectual significance of the Hebrew Bible both as a document of its time and as an important step in the development of thought. It presents the major aspects of biblical religion through detailed literary analyses of key texts, presented in English translation to make them accessible to the general reader as well as scholars.

"In this stunning tour-de-force, Stephen Geller makes the voices of biblical tradition live again and resound for contemporary readers. He explores the congeries of biblical traditions- the Deuteronomic, the priestly, wisdom, and prophecy- and illuminates how they transformed what was before them, how they vied with each other for preeminence, and highlights their multiplicity and the dynamics of their innovation. He examines each one of these traditions and brings the entire enterprise to a symphonic conclusion.. it is hoped that he [Geller] will continue to write and grapple more directly with this issue in his future work; this reader will be waiting with great expectation."
-Pamela Barmash, "Conservative Judaism
"This is an impressive book that merits a wide readership ... Geller has the touch that comes from thoughtful learning and careful teaching ... A final word to those who read one book on the Bible each year: make Geller's "Sacred Enigmas this year's choice."
-"Christianity and Literature
..."a thoughtful, careful, and mature work...Geller has produced a fine, reflective work that deserves the careful reading of sophisticated lay readers of biblical scholarship and all within the guild of Hebrew Bible scholarship."
-"Review of Biblical Literature

Preface. Chapter 1. Introduction Chapter 2. The Struggle at the Jabbok: The Uses of Enigma in Biblical Religion Chapter 3. Fiery Wisdom: The Deuteronomic Tradition Chapter 4. Blood Cult: An Interpretation of the Priestly Work of the Pentateuch Chapter 5. Where is Wisdom? Chapter 6. The Riddle of Prophecy Chapter 7. The Rape of Dinah: Sexuality and Transcendence Chapter 8. The Garden of the Self Chapter 9. History, Literature and Religion Epilogue Notes.

GOR010092342
Sacred Enigmas: Literary Religion in the Hebrew Bible by Stephen Geller
Stephen Geller
Used - Very Good
Hardback
Taylor & Francis Ltd
1996-10-31
236
0415127718
9780415127714
N/A
Book picture is for illustrative purposes only, actual binding, cover or edition may vary.
This is a used book - there is no escaping the fact it has been read by someone else and it will show signs of wear and previous use. Overall we expect it to be in very good condition, but if you are not entirely satisfied please get in touch with us.