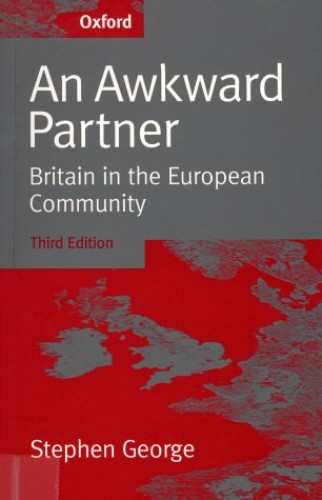 In Stock
$18.49
inc. GST
This volume surveys the policies that earned Britain the reputation for being at odds with major European Community initiatives and for taking an independent point of view. It records the role successive British governments have played in the European Community up to 1997.
Very Good Well Read
Only 1 left

This is the third edition of an established textbook on Britain's role in the European Community. Britain joined the EC in 1973, over twenty years after the first of the European Communities was formed. Within a year, she had established a reputation for being at odds with major Community initiatives and for taking an independent point of view.This reputation was consolidated over the next twenty-four years. In An Awkward Partner Stephen George surveys the policies that earned Britain this reputation, recording the role successive British governments have played in the European Community. He stresses the influence both of external circumstances and domestic political considerations in shaping these policies and analyses some of the underlying political reasons for Britain's perceived awkwardness. The first edition was the first book-length survey to appear in English of British policy toward the European Community, and rapidly became established as the leading book in the field for students. In this third edition, Stephen George brings his analysis up to date, taking the story of the Major Government through to its end in the 1997 general election. This new edition will continue to be invaluable to students taking courses on the European Community, comparative European politics, and public policy.

'This is an excellent book ... it presents an extremely good, concise overview of its subject.' * S. Hastings, South Bank University *
'Excellent up to date analysis of Britain's longstanding reluctance toward Europe and the implications for the future of the UK and the EU.' * A. McGauley, Sheffield Hallam University *
'The best historical accountof the UK's approach to the EC. Well-written and accurate.' * Jonathan Tonge, University of Salford *
'Stephen George's book is an excellent political history of Britain in the European Community. For those with little or no knowledge of this it is extremely useful.' * Gerald Xavier Mirfin *