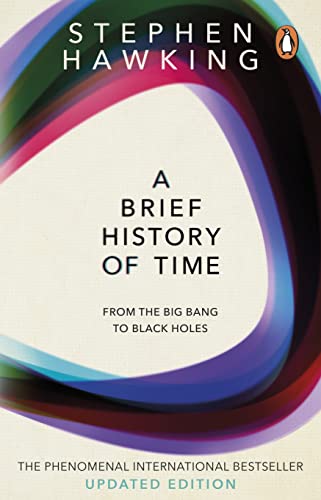 A Brief History Of Time
by Stephen Hawking (University of Cambridge)

In Stock
$15.49
inc. GST
Was there a beginning of time? Could time run backwards? Is the universe infinite or does it have boundaries? This book examines these questions. It begins by reviewing the great theories of the cosmos from Newton to Einstein, before delving into the secrets which still lie at the heart of space and time, from the Big Bang to black holes.
Very Good Good Well Read
53 in stock

A Brief History Of Time Summary

A Brief History Of Time: From Big Bang To Black Holes by Stephen Hawking (University of Cambridge)

Was there a beginning of time? Could time run backwards? Is the universe infinite or does it have boundaries?

These are just some of the questions considered in the internationally acclaimed masterpiece by the world renowned physicist - generally considered to have been one of the world's greatest thinkers. It begins by reviewing the great theories of the cosmos from Newton to Einstein, before delving into the secrets which still lie at the heart of space and time, from the Big Bang to black holes, via spiral galaxies and strong theory. To this day A Brief History of Time remains a staple of the scientific canon, and its succinct and clear language continues to introduce millions to the universe and its wonders.

This new edition includes recent updates from Stephen Hawking with his latest thoughts about the No Boundary Proposal and offers new information about dark energy, the information paradox, eternal inflation, the microwave background radiation observations, and the discovery of gravitational waves.

It was published in tandem with the app, Stephen Hawking's Pocket Universe.

A Brief History Of Time Reviews

This app/book version of Hawking's famous laymen book is just an amazing piece of learning. This makes much more accessible and understandable the complex and awesome topics dealt by Hawking as he explains how our universe works. I am just in awe at how creative he is to produce one of a kind e-book like this. The pace, illustrations and connections of topics within the book are so helpful and so appropriate for the new generation used to tweets and small bites of information. You can flip over some topics when you have some time, learn some amazing fact, and come back later which no rush or worry about how fast you are progressing through the book. Hope other books on complex topics are translated to this format. And I love the updates of the latest science since the publication of the original book. We have learned so much in the last decade that I agree with Hawking, it is an honour to live in this times. * Ribozyme *
Master of the Universe... One scientist's courageous voyage to the frontiers of the Cosmos * Newsweek *
This book marries a child's wonder to a genius's intellect. We journey into Hawking's universe, while marvelling at his mind * The Sunday Times *
He can explain the complexities of cosmological physics with an engaging combination of clarity and wit... His is a brain of extraordinary power * Observer *
To follow such a fine mind as it exposes such great problems is an exciting experience * The Sunday Times *

About Stephen Hawking (University of Cambridge)

Stephen Hawking held the post of Lucasian Professor of Mathematics and Theoretical Physics at Cambridge, the chair held by Isaac Newton in 1663, for thirty years. Professor Hawking is now Director of Research for the Centre for Theoretical Cosmology at the University of Cambridge. He has over a dozen honorary degrees, and was awarded the Companion of Honour in 1989. He is a fellow of the Royal Society and a Member of the US National Academy of Science. His books include the bestselling Black Holes and Baby Universes and Other Essays, The Universe in a Nutshell, and A Briefer History of Time. His most recent book, The Grand Design, was a Sunday Times bestseller. Stephen Hawking is regarded as one of the most brilliant theoretical physicists since Einstein. He lives in Cambridge.

GOR003213239
A Brief History Of Time: From Big Bang To Black Holes by Stephen Hawking (University of Cambridge)
Stephen Hawking (University of Cambridge)
Used - Very Good
Paperback
Transworld Publishers Ltd
2011-08-18
272
0857501003
9780857501004
Winner of Aventis Prizes 1989 (UK)
Book picture is for illustrative purposes only, actual binding, cover or edition may vary.
This is a used book - there is no escaping the fact it has been read by someone else and it will show signs of wear and previous use. Overall we expect it to be in very good condition, but if you are not entirely satisfied please get in touch with us.