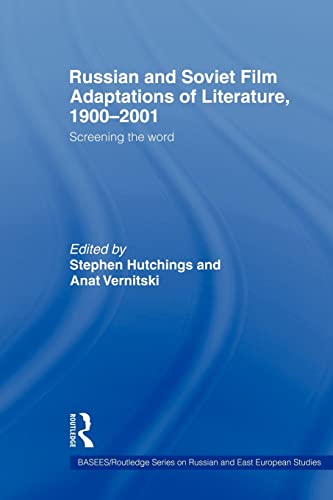 Providing many interesting case studies and bringing together many leading authorities on the subject, this book examines the importance of film adaptations of literature in Russian cinema, especially during the Soviet period when the cinema was accorded a vital role in imposing the authority of the communist regime on the consciousness of the Soviet people.

'While each article addresses different theoretical approaches, and strives to answer dissimilar questions, they are unified by the book's mission, and the collection as a whole manages to create an illuminating overall picture of the development of Russian/Soviet/post-Soviet ekranizatsii...This collection is a perceptive overview and a great reference book--for the curious general reader as well as for the specialist--which can be used as a textbook for a course on Russian literature and cinema, as an insightful addition to a course on Socialist Realism, or as a source for anyone interested in Soviet and Post-Soviet culture."-Slavic and East European Journal, 50.2 (Summer 2006)

'This volume contains thorough studies, which in their entirety do justice to the editor's claim of providing a general overview, as set out in the introduction.'

'The contributors develop useful paradigms for every decade and illustrate them with examples. These ten pages alone represent a comprehensive history of film adaptions, which illustrates the complex interaction between ideological premisses and a reassessment of the great writers of Russian and Soviet literature, as well as world literature.' - Christine Engel, University of Innsbruck

Stephen Hutchings is Professor of Russian at the University of Surrey. Recipient of two large AHRB grants and author of monographs on Leonid Andreev, Russian Modernism, and Russian literature's relationship with the camera, he is currently researching post-Soviet television culture. Anat Vernitski is Lecturer in Russian at the School of Slavonic and East European Studies, University College London. She published on twentieth-century Russian literature and on cultural representations of Orthodox Christianity. She is currently researching Russian emigre literature of the 1920s and 1930s.
Introduction: The Importance of the Ekranizatsiia in 20th Century Russian and Soviet Culture Part 1 Soviet Film Adaptations under Lenin and Stalin: Manufacturing the Myth 1. Popular Literature in Film Adaptations of the NEP Period 2. Moving Images and Eye-deologies: Visuality and the Political in the Soviet Screen Adaptation of Literature 3. National Historical Mythologies on the Soviet Screen: The Film Version of Tolstoy's 'Peter the Great' Part 2 Literature and Film in the Post-Stalin Era: The Myth in Retreat 4. Unauthor-ized Copies: The Image of the Writer in the Post-Stalin Film Adaptation 5. Kozintsev's Film Adaptations of Shakespeare 6. Aksenov: Young Prose and the Cinema of the Thaw 7. Pushkin's 'Arap Petra Pervogo' and its Film Adaptation 8. The Writer as Director in Late Soviet Russia: Vasilii Shukshin Part 3 From Text to Screen, Soviet to Post-Soviet: Re-viewing the Russian National Myth 9. Imperially My Dear Watson: The Sherlock Holmes Series and the Decline of the Soviet Empire 10. Official versus Dissent: The Mikhalkov Brothers' View of Russia's Past 11. 'I Love You Dear Captive': Gender, Narrative and Chronotope in The Screened Caucasus Tale 12. Re-reading/Re-viewing Dostoevskii in the Post-Soviet Era: The Challenge of the Spiritual
NLS9780415546126
9780415546126
0415546125
Russian and Soviet Film Adaptations of Literature, 1900-2001: Screening the Word by Stephen Hutchings (University of Surrey, UK)
Stephen Hutchings (University of Surrey, UK)
New
Paperback
Taylor & Francis Ltd
2009-04-29
232
N/A
Book picture is for illustrative purposes only, actual binding, cover or edition may vary.
This is a new book - be the first to read this copy. With untouched pages and a perfect binding, your brand new copy is ready to be opened for the first time
Trustpilot