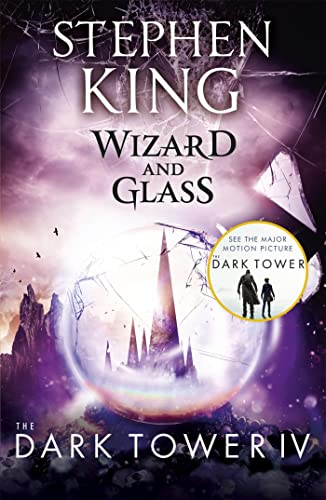 The Dark Tower IV: Wizard and Glass
by Stephen King

In the fourth novel in Stephen King's bestselling fantasy quest, the Dark Tower beckons Roland, the Last Gunslinger, and the four companions he has gathered along the road.

In a terrifying journey where hidden dangers lurk at every junction, the pilgrims find themselves stranded in an alternate version of Topeka, Kansas, that has been ravaged by a superflu virus.

While following the deserted highway toward a distant glass palace, Roland recounts his tragic story about a seaside town called Hambry, where he fell in love with a girl named Susan Delgado and where he and his old tet-mates Alain and Cuthbert battled the forces of an evil harrier who ignited Mid-World's final war.

GOR004372753
The Dark Tower IV: Wizard and Glass: (Volume 4) by Stephen King
Stephen King
Used - Very Good
Paperback
Hodder & Stoughton
2012-02-16
896
1444723472
9781444723472
N/A
Book picture is for illustrative purposes only, actual binding, cover or edition may vary.
This is a used book - there is no escaping the fact it has been read by someone else and it will show signs of wear and previous use. Overall we expect it to be in very good condition, but if you are not entirely satisfied please get in touch with us.