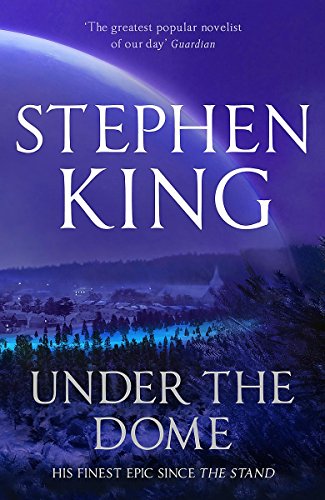 Under the Dome
by Stephen King

On the heels of the stunning success of Under the Dome, Hodder's bestselling Stephen King title this decade, comes a collection of four brand new, darkly riveting and intimate stories.

Under the Dome Summary

Under the Dome by Stephen King

Celebrated storyteller Stephen King returns to his roots in this tour de force featuring more than 100 characters - some heroic, some diabolical - and a supernatural element as baffling and chilling as any he's ever conjured.

On an entirely normal, beautiful fall day in Chester's Mill, Maine, the town is inexplicably and suddenly sealed off from the rest of the world by an invisible force field. Planes crash into it and fall from the sky in flaming wreckage, a gardener's hand is severed as 'the dome' comes down on it, people running errands in the neighboring town are divided from their families, and cars explode on impact. Dale Barbara, Iraq vet, teams up with a few intrepid citizens against the town's corrupt politician. But time, under the dome, is running out....

UNDER THE DOME is King at his epic best and will capture a brand new readership as well as thrilling his existing fans.

Under the Dome Reviews

GOR001430470
Under the Dome by Stephen King
Stephen King
Used - Very Good
Hardback
Hodder & Stoughton General Division
2009-11-10
416
0340992565
9780340992562
N/A
Book picture is for illustrative purposes only, actual binding, cover or edition may vary.
This is a used book - there is no escaping the fact it has been read by someone else and it will show signs of wear and previous use. Overall we expect it to be in very good condition, but if you are not entirely satisfied please get in touch with us.