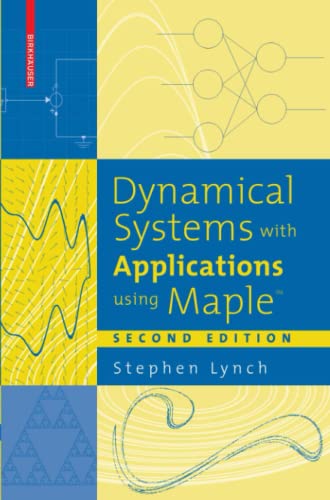 This new edition has been thoroughly updated and expanded to include more applications, examples, and exercises, all with solutions. It contains two new chapters on neural networks and simulation.

New edition has been thoroughly updated and expanded to include more applications, examples, and exercises, all with solutions

Accessible to a broad, interdisciplinary audience of readers with a general mathematical background, including senior undergraduates, graduate students, and working scientists in various branches of applied mathematics, the natural sciences, and engineering

A hands-on approach is used with Maple as a pedagogical tool throughout; Maple worksheet files are listed at the end of each chapter, and along with commands, programs, and output may be viewed in color at the author's website with additional applications and further links of interest at Maplesoft's Application Center

"The text treats a remarkable spectrum of topics and has a little for everyone. It can serve as an introduction to many of the topics of dynamical systems, and will help even the most jaded reader, such as this reviewer, enjoy some of the interactive aspects of studying dynamics using Maple." -UK Nonlinear News (1st Edition)

"This book covers standard material for an introduction to dynamical systems theory. Written for both advanced undergraduates and new postgraduate students, this book is split into two distinctive parts: continuous systems using ordinary differential equations and discrete dynamical systems. Lynch uses the Maple package as a tool throughout the text to help with the understanding of the subject. The book contains over 250 examples and exercises with solutions and takes a hands-on approach. There are over 300 individual figures including about 200 Maple plots, with simple commands and programs listed at the end of each chapter...This publication will provide a solid basis for both research and education in nonlinear dynamical systems." -The Maple Reporter (1st Edition)

"The book will be useful for all kinds of dynamical systems courses.... [It] shows the power of using a computer algebra program to study dynamical systems, and, by giving so many worked examples, provides ample opportunity for experiments. ... [It] is well written and a pleasure to read, which is helped by its attention to historical background." -Mathematical Reviews (1st Edition)

"... a very nice tutorial on Maple in which quite a few mathematical and graphical commands are illustrated. A student could quickly work through this tutorial and then be ready to do quite a bit with Maple....[The second part of Hilbert's 16th problem] is not the topic encountered in most ODE texts, even if the question has been open for 100 years! ... Lynch's book provides great references, as well as Maple code that could be easily modified by readers who have the tools to quickly engage in quite sophisticated numerical experimentation." -SIAM Review (1st Edition)

"A student or scientist, who works through some chapters of the book, learns a good deal about the presented mathematical concepts and possibilities of the symbolic algebra package to assist the researcher in understanding his mathematical model." -Dynamical Systems Magazine (1st Edition)

"This book, that provides an introduction to the study of dynamical systems with the aid of the algebraic package Maple, is the second edition of the well known classical book of Stephen Lynch ... . a well written and highly readable introduction to the numerical study dynamical systems with Maple at an introductory level that covers many topics of this subject and can be used as a very valuable resource for many courses in applied mathematics and modelization in engineering and physical sciences." (Manuel Calvo, Zentralblatt MATH, Vol. 1193, 2010)

GOR010172930
Dynamical Systems with Applications using Maple (TM) by Stephen Lynch
Stephen Lynch
Used - Very Good
Paperback
Birkhauser Boston Inc
2009-12-01
500
0817643893
9780817643898
N/A
Book picture is for illustrative purposes only, actual binding, cover or edition may vary.
This is a used book - there is no escaping the fact it has been read by someone else and it will show signs of wear and previous use. Overall we expect it to be in very good condition, but if you are not entirely satisfied please get in touch with us.