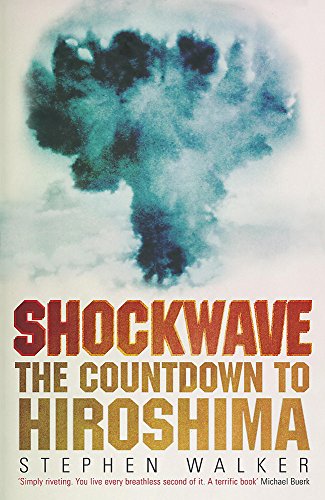 Out of Stock
$17.49
inc. GST
The countdown to Hiroshima and its horrific aftermath seen through the eyes of eyewitnesses
Like New
Only 0 left

August 6th, 1945, 9.15 a.m. Six miles above Hiroshima, the bombardier of the Enola Gay releases an atomic bomb into the freezing skies. Seconds later, the city is obliterated in a single, monumental blast of fire. The destruction is immediate and catastrophic, as if a small sun had suddenly exploded. Tens of thousands of people are instantly annihilated. In that moment, the world will never be the same again.

Combining a rich array of interviews with gripping storytelling, Stephen Walker's Shockwave presents an extraordinary and unforgettably moving portrait of one of the defining events of the twentieth century.

A devastating story grippingly told, Shockwave also succeeds in being a compelling portrayal of human beings at work. * Lloyds List *
Simply riveting. You live every breathless second of it. A terrific book * Michael Buerk *
Remarkable. I have been waiting for this book for sixty years * Gitta Sereny author of Albert Speer *
Riveting * Soldier *
Shockwave combines racy, colorful historical detail with profound human concern in a way that does justice to its weighty theme. A remarkable storytelling achievement * Frederick Taylor, author of Dresden *
'Somehow through the pages of this taut chronology the merest whisper of the enormity of it all comes through.' * Word Magazine *
'This is an utterly gripping work of micro-history' * Sunday Express *
Brilliant * Financial Times *
Tells you everything you want to know about Hiroshima * The Sunday Times *
'Walker is content to let the terrible story speak for itself ... offers a timely and harrowing reminder' * Scotland On Sunday *
'A stunning book, among the most immediate and thrilling works of history I have ever read' * Irish Times *
'It is the human details that resonate the most...an utterly gripping work of micro-history' * Evan Griffiths, Daily Express *
'An exciting narrative' * Herald *
'Stephen Walker has produced a bravura performance ... the horror of what happened is almost impossible to bear' * BBC Focus *
'A stunning chronicle of one of the 20th-century's defining moments' * Good Book Guide *

Stephen Walker read Modern History at Oxford and went on to do a Master's degree at Harvard. He was a documentary maker for the BBC for twelve years and more recently for his own company, Walker George Films.

He has also directed TV drama, written films such as Death and the Maiden with Ariel Dorfmann, worked as a journalist and written a book, King of Cannes.

GOR010437959
Shockwave by Stephen Walker
Stephen Walker
Used - Like New
Paperback
Hodder & Stoughton General Division
2006-05-22
368
0719566266
9780719566264
N/A
Book picture is for illustrative purposes only, actual binding, cover or edition may vary.
The book has been read, but looks new. The book cover has no visible wear, and the dust jacket is included if applicable. No missing or damaged pages, no tears, possible very minimal creasing, no underlining or highlighting of text, and no writing in the margins.