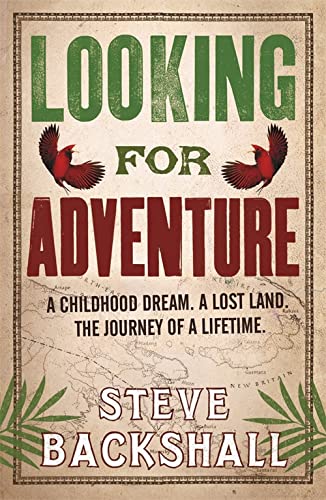 Looking for Adventure
by Steve Backshall

Looking for Adventure by Steve Backshall

A Childhood Dream. A Lost Land. The Journey of a Lifetime.

How do you become an explorer? It's a question every child has asked. And, Steve Backshall was no different. But after a rainy-day visit to an exhibition of artefacts from Papua New Guinea, it was a question that began to obsess the seven-year old Backshall.

Due to this childhood interest, the vast, untamed wildness of Papua New Guinea was where Backshall forged his unlikely path. From crushing lows of early failures to the extraordinary highs of the BBC's Lost Land of the Volcano expedition, it was this dark island which gave Backshall his opportunity. Full of incredible wildlife, extraordinary wilderness, jungles, cannibals, pitfalls, triumph, danger and excitement, Looking for Adventure is the irresistible, inspiring story of a little boy who let his heart rule his head.

Born in 1973, Steve Backshall was brought up on a farm. He studied English at University before taking a second degree in Biology. He is the presenter of the top-rated CBBC natural history programme, DEADLY 60. After writing for ROUGH GUIDES and filming documentaries for NATIONAL GEOGRAPHIC he became a key member of the expedition team for the hit series, LOST LAND OF THE JAGUAR, LOST LAND OF THE VOLCANO and LOST LAND OF THE TIGER. Steve has also written several books for children.

GOR004153444
Looking for Adventure by Steve Backshall
Steve Backshall
Used - Very Good
Paperback
Orion Publishing Co
2012-05-24
352
0753828723
9780753828724
N/A
Book picture is for illustrative purposes only, actual binding, cover or edition may vary.
This is a used book - there is no escaping the fact it has been read by someone else and it will show signs of wear and previous use. Overall we expect it to be in very good condition, but if you are not entirely satisfied please get in touch with us.