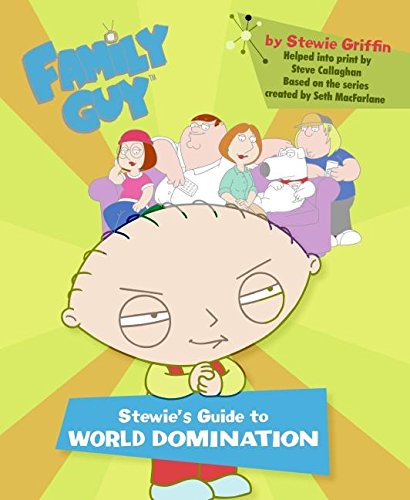 In Stock
$16.99
+10% GST
The toddler from hell, Stewie Griffin speaks out on his dysfunctional family, modern society, and his plans to achieve world domination, offering wicked reflections on such topics as love, preschool, pop culture, politics, parenting, family, work, and more, in a companion volume to the popular TV comedy. Original. 40,000 first printing.
Very Good
Only 1 left

For the first time ever a cancelled show has been resurrected on the basis of its cult following in syndication, on the internet and on DVD (Over 2.2 million DVDs sold to date!) and we've got the tie-in book authored by one of the show's hilarious lead writers and animators!

At first sight, the Griffens may seem like a normal blue collar family from Quonochontaug Rhode Island, but Peter (the family's loutish dad), Brian (the erudite, martini-swilling pet dog) and Stewie (the evil toddler son) set them apart from all others.

Now Stewie--a true baby genius and the most popular of the Griffen clan--speaks out. Having been hell bent on achieving world domination ever since he escaped the cursed ovarian Bastille he was incarcerated in for nine grueling months, he has finally decided that in order to rule the world we live in one must first understand it. Herewith are his musings on family, love, parenting, preschool, work, pop culture, politics and more. If only we knew then what Stewie knows now, adults everywhere could have defeated their mother's matriarchal tyranny and toppled the "gynocracy" she ruled over . . .and god knows what else!

This book is for the insufferable child in us all, eager to buck the ways of the old guard or just eager for a laugh.

Steve Callaghan is a writer and producer of Family Guy and has worked on the show since its inception. He has also written sitcoms for CBS and MTV, screenplays, and live sketch comedy. He lives in Los Angeles.

GOR001657461
Family Guy: Stewie's Guide to World Domination by Steve Callaghan
Steve Callaghan
Used - Very Good
Paperback
HarperCollins Publishers
2005-04-30
112
0060773219
9780060773212
N/A
Book picture is for illustrative purposes only, actual binding, cover or edition may vary.
This is a used book - there is no escaping the fact it has been read by someone else and it will show signs of wear and previous use. Overall we expect it to be in very good condition, but if you are not entirely satisfied please get in touch with us.