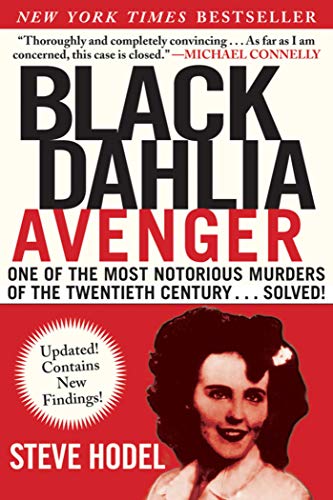 Black Dahlia Avenger: A Genius for Murder: The True Story by Steve Hodel

A New York Times Bestseller! For viewers of the hit Series I Am the Night and fans of the Root of Evil Podcast, the book that finally revealed the shocking identity of the Black Dahlia Killer-and the Police Corruption That Concealed It for So Long

In 1947, the brutal, sadistic murder of a beautiful young woman named Elizabeth Short led to the largest manhunt in LA history. The killer teased and taunted the police and public for weeks, but his identity stayed a mystery, and the murder remained the most tantalizing unsolved case of the last century, until this book revealed the bizarre solution.

Steve Hodel, a retired LAPD detective, took up the case, reviewing the original evidence and records as well as those of a separate grand jury investigation into a series of murders of single women in LA at the time. The prime suspect had in fact been identified, but never indicted. Why? And who was he?

In an account that will remind movie lovers of both LA Confidential and Zodiac, for the corruption it exposes and the insight it offers into a serial killer's mind, Hodel demonstrates that there was a massive police cover-up. Even more shocking, he proves that the murderer, a true-life Jekyll and Hyde who was a highly respected member of society by day and a psychopathic killer by night, was his own father.

This edition of the book includes new findings and photographs added after the original publication, together with a new postscript by the author.

"The most haunting murder mystery in Los Angeles County during the twentieth century has finally been solved in the twenty-first century."-Stephen R. Kay, L.A. County Head Deputy District Attorney

"As far as I am concerned, this case is closed. . . . .Los Angeles is a construct of its mythologies good and bad, fact and fic tion. The legend of Elizabeth Short is one of the most enduring. Hodel's investigation is thoroughly and completely convincing. So too is this book."-Michael Connelly, author of the New York Times bestseller The Narrows

"Crime was rampant as musicals in Los Angeles in the postwar years- this is the age of Bugsy Siegel, the founding of Las Vegas, Mickey Cohen and gun battles on Sunset Boulevard . . . and it's the age of film noir. . . . George Hodel, I think, is fit company for some of noir's most civilized villains-like Waldo Lydecker in Laura, Harry Lime in The Third Man, or even Noah Cross in Chinatown."- New York Times Book Review

"[Hodel] paints a chilling, detailed, week-by-week, year-by-year portrait of his father as an intellectual giant driven to serial killing by his arrested emotional development, his hatred of women and his obsessions with money, power and sex."-Los Angeles Times

"The book has been described as 'Hannibal Lecter meets L.A. Confidential meets Chinatown,' but even that Hollywood characterization doesn't do it justice. Former Los Angeles police detective Steve Hodel has written one of the most compelling true-crime books of all time." -Seattle Weekly

"An ex-L.A. cop uncovers a painful answer to the notorious 1947 Black Dahlia slaying. Hodel appears to have solved one of the most sensational murders in the history of Los Angeles." -People

"[Hodel] has written an intensely readable account. . . . So what's the final verdict on Black Dahlia Avenger? Its accounts of cover-ups and civic cor ruption are all too believable, and much of the circumstantial evidence it presents against George Hodel is persuasive. . . . Has Steve Hodel solved the case? I think so." -The Weekly Standard
"[Hodel] makes a strong case that the Black Dahlia was part of a larger series of ritual murders that went on for years. This unsparing, chilling account of the actions of a perfect psychopath grips to the end." -Toronto Globe and Mail
"Hodel tells the story well and with incredible objectivity. A real-life tale of Dr. Jekyll and Mr. Hyde." -Richmond Times-Dispatch

"This remarkable book will keep readers riveted from the first page to the very last." -Tucson Citizen

"In this 2003 case study, Hodel declares the case is solved. He offers irre futable evidence piled fact upon fact as only the mind of a professional detective can present. Black Dahlia Avenger is packaged as neatly as a court deposition." -St. Augustine Record

"The story boasts all the glamour and sinister mystique of film noir." -The Daily Telegraph (London)

"Readers must hang on tightly as Hodel hurtles along on his compelling parallel journeys of discovery-a return to the melodramatic days of old Hollywood and a simultaneous plunge into the dark roots of his own fam ily tree." -London Free Press

"The best nonfiction book about L.A. crime I have ever read." -Gerald Petievich, author of The Sentinel and To Live and Die in L.A.
"Completely convincing . . . As far as I am concerned, this case is closed." Michael Connelly, bestselling author of the Harry Bosch series

Steve Hodel was born and brought up in Los Angeles. Now a private investigator, he spent almost twenty-four years with the LAPD, most of them as a homicide detective supervisor, and had one of the highest solve rates on the force. He is also the author of Most Evil and Black Dahlia Avenger II. He lives in Sherman Oaks, California.

GOR007002941
Black Dahlia Avenger: A Genius for Murder: The True Story by Steve Hodel
Steve Hodel
Used - Very Good
Paperback
Skyhorse Publishing
2015-02-17
550
1628724390
9781628724394
N/A
Book picture is for illustrative purposes only, actual binding, cover or edition may vary.
This is a used book - there is no escaping the fact it has been read by someone else and it will show signs of wear and previous use. Overall we expect it to be in very good condition, but if you are not entirely satisfied please get in touch with us.