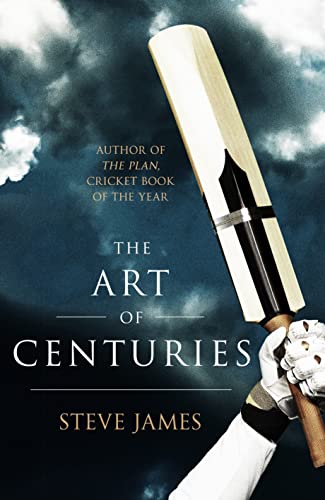 The Art of Centuries
by Steve James

Out of Stock
$27.99
inc. GST
SHORTLISTED FOR CRICKET BOOK OF THE YEAR AT THE BRITISH SPORTS BOOK AWARDSA century has always had a special resonance, in all walks of life, and none more so than in cricket.
Like New
Only 0 left

The Art of Centuries Summary

The Art of Centuries by Steve James

SHORTLISTED FOR CRICKET BOOK OF THE YEAR AT THE BRITISH SPORTS BOOK AWARDS A century has always had a special resonance, in all walks of life, and none more so than in cricket. Scoring one hundred runs is the ultimate for a batsman. As former England captain Andrew Strauss admits, it's incredibly hard to do; for Ricky Ponting, it's a transformational moment in the career of a cricketer. Or in the words of Geoffrey Boycott, 'a century has its own magic'. In The Art of Centuries, Steve James applies his award-winning forensic insight to the very heart of batting. Through interviews with the leading run-scorers in cricket history and his own experiences, Steve discovers what mental and physical efforts are required to reach those magical three figures. Despite his own haul of 47 first-class tons, he himself felt at times that he was poorly equipped for the task. So working out how to score centuries is an art. And bowlers might not agree, but there really is no better feeling in cricket.

The Art of Centuries Reviews

"Combines anecdote and insight drawn from personal experience into a fine book on the art of batsmanship." * The Guardian, Books of the Year *
"A beguiling insight into the trials, tribulations and triumphs of life as a batsman." * Lawrence Booth, editor of Wisden *
"I love the way Steve James writes about cricket, his endless curiosity and generosity. The Art of Centuries distils a lifetime's wisdom, joy and frustration - a three-figure literary innings." * Gideon Haigh *
"Excellent." -- Mike Atherton * The Times *
"A delight... It is always fun to read Steve's work. His previous book The Plan was a terrific breakdown of how Duncan Fletcher and Andy Flower took England to the top during their time as head coach. This new book has a nice, light, often discursive touch to it, and I like discursive, that delightful pathway into digression where one memory prompts another." -- Mike Selvey * The Guardian *

Steve James has been writing about cricket and rugby for the Daily Telegraph and the Sunday Telegraph for more than ten years. He read Classics at Swansea University before becoming a postgraduate at Cambridge, where he won a Blue in the side captained by Mike Atherton. He played his county cricket with Glamorgan for eighteen years, scoring nearly 16,000 runs at an average of over 40, and captaining them for three seasons, winning a National League trophy in 2002, before retiring due to injury. In 1997 James helped Glamorgan to win the County Championship for the first time in nearly thirty years and was named the Professional Cricketers Association Player of the Year. He still holds the record for highest score by a Glamorgan batsman (309 not out against Sussex at Colwyn Bay in 2000) and also won two caps for England.

GOR010427834
The Art of Centuries by Steve James
Steve James
Used - Like New
Hardback
Transworld Publishers Ltd
2015-04-09
304
0593072928
9780593072929
N/A
Book picture is for illustrative purposes only, actual binding, cover or edition may vary.
The book has been read, but looks new. The book cover has no visible wear, and the dust jacket is included if applicable. No missing or damaged pages, no tears, possible very minimal creasing, no underlining or highlighting of text, and no writing in the margins.