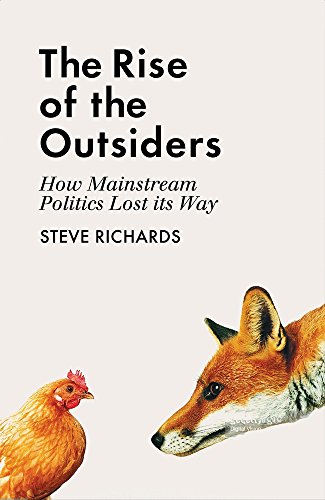 The Rise of the Outsiders
by Steve Richards

Used Price
$20.99
inc. GST
Free Shipping in Australia
Intelligent, nuanced and wide-ranging, this is the essential handbook for understanding the chaotic political times in which we live.
Reviews:
Trustpilot
Like New Very Good

The Rise of the Outsiders Summary

The Rise of the Outsiders: How Mainstream Politics Lost its Way by Steve Richards

Intelligent, nuanced and wide-ranging, this is the essential handbook for understanding the chaotic political times in which we live.

In recent years, voters have deserted the political centre like never before. Whether it's Trump, Brexit, Le Pen, or Corbyn, outsiders and populists are flourishing on the far left and far right.

Celebrated political commentator Steve Richards explores factors from globalization and fake news to rising immigration and stagnant wages. Richards argues that the reasons for the success of the outsider also sows the seeds of their eventual demise. If they do gain power, they inevitably become insiders themselves - and fail to live up to their extravagant promises.

This landmark book examines the rapidly shifting global political landscape of the last decade, and is essential reading for anyone who has been bothered by Brexit, troubled by Trump or confused by Corbyn.

Customer Reviews - The Rise of the Outsiders

The Rise of the Outsiders Reviews

There is no more insightful observer of the British scene than this reasoned pundit... [Richards] brilliantly nails it. * Observer *
Richards offers valuable insights into how awkward political power really is. * Guardian *
Excellent... An important and insightful account of the current rise of populism amid the collapse of trust in both conventional politics and politicians. * Jon Snow - Newsreader, Channel Four News *
Steve Richards is quite simply one of the best in the business. * John Kampfner *
Easily one of our best commentators. * David Aaronovitch *
Steve Richards is a fine columnist and thoughtful political commentator. This book gets to the heart of why conventional politicians and parties are struggling and failing to adapt to the challenge of the outsiders, opening the door to Trump, the Brexiteers and European movements of far left and right. * Vince Cable - former Secretary of State for Business, Innovation and Skills *
Insightful and well researched... The Rise of the Outsiders is both a stinging rebuke to established parties of left and right, but also a clarion call to mainstream politicians to call-out empty populism and make anew the case for sane government. * Ed Balls -- former Shadow Chancellor to the Exchequer *
Incisive and urgent... This needs to be read by anyone trying to understand the nature of the current political system in Western democracies. * Alasdair Blair - Jean Monnet Professor of International Relations, De Montfort University, Leicester *
An important book about the social forces behind the disruptive challenges to mainstream politics and the future of representative political parties. * Baron David Willetts - Executive Chair of the Resolution Foundation *
Fascinating... an unusual book by one of our best political commentators * Tribune magazine *
rigorous examination . . . accessible and informative * The Tablet *

Steve Richards is a political columnist, journalist, and presenter. He presents Week in Westminster on BBC Radio Four among other programmes on BBC Radio and Television. He writes for several national newspapers and was formerly Chief Political Reporter at the Independent and Political Editor at the New Statesman. He also fronts a popular political show each year at Edinburgh Festival.

GOR010868242
The Rise of the Outsiders: How Mainstream Politics Lost its Way by Steve Richards
Steve Richards
Used - Like New
Paperback
Atlantic Books
2018-03-01
368
1786491443
9781786491442
N/A
Book picture is for illustrative purposes only, actual binding, cover or edition may vary.
The book has been read, but looks new. The book cover has no visible wear, and the dust jacket is included if applicable. No missing or damaged pages, no tears, possible very minimal creasing, no underlining or highlighting of text, and no writing in the margins.