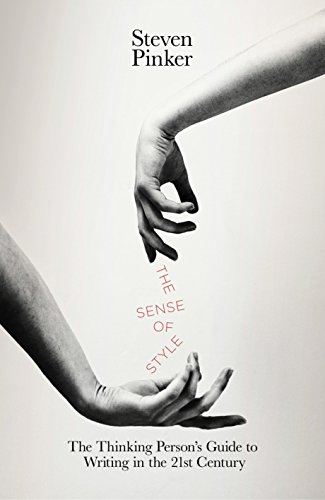 The Sense of Style by Steven Pinker

What is the secret of good prose? Does writing well even matter in an age of instant communication? Should we care? In this book about the modern art of writing, the author shows us why we all need a sense of style.

The Sense of Style: The Thinking Person's Guide to Writing in the 21st Century by Steven Pinker

Steven Pinker, the bestselling author of The Language Instinct, deploys his gift for explaining big ideas in The Sense of Style - an entertaining writing guide for the 21st century What is the secret of good prose? Does writing well even matter in an age of instant communication? Should we care? In this funny, thoughtful book about the modern art of writing, Steven Pinker shows us why we all need a sense of style. More than ever before, the currency of our social and cultural lives is the written word, from Twitter and texting to blogs, e-readers and old-fashioned books. But most style guides fail to prepare people for the challenges of writing in the 21st century, portraying it as a minefield of grievous errors rather than a form of pleasurable mastery. They fail to deal with an inescapable fact about language: it changes over time, adapted by millions of writers and speakers to their needs. Confusing changes in the world with moral decline, every generation believes the kids today are degrading society and taking language with it. A guide for the new millennium, writes Steven Pinker, has to be different. Drawing on the latest research in linguistics and cognitive science, Steven Pinker replaces the recycled dogma of previous style guides with reason and evidence. This thinking person's guide to good writing shows why style still matters: in communicating effectively, in enhancing the spread of ideas, in earning a reader's trust and, not least, in adding beauty to the world. Eye-opening, mind-expanding and cheerful, The Sense of Style shows that good style is part of what it means to be human. An award-winning cognitive scientist, Steven Pinker is also Chair of the Usage Panel of the American Heritage Dictionary and the lauded author of bestsellers such as The Language Instinct, Words and Rules, The Better Angels of Our Nature and The Stuff of Thought. He is Johnstone Family Professor in the Department of Psychology at Harvard and lives in Boston & Truro, MA.
Steven Pinker's The Sense of Style: The Thinking Person's Guide to Writing in the 21st Century might be regarded as an update of Fowler, eschewing pedantry, convoluted or pompous sentence construction, cliche, and inflexible grammatical rules. Pinker is every bit as witty as Fowler, and writes in a similarly vigorous, direct and idiosyncratic manner. His book is accordingly much less boring than one might expect of a style manual. Indeed, it is often laugh-out-loud funny... Pinker knows that simplicity is more difficult to perfect than abstruse convolution. It helps enormously that he is such a beautiful stylist himself. Many of his sentences give great pleasure and he is never lofty or pleased with himself -- Paula Byrne * The Times *
Gentle humour accompanies Mr Pinker's good sense throughout the book, an antidote to bestselling, operatically irate usage guides that disparage those who disagree as idiots or barbarians. Mr Pinker explains eloquently not just what to do, but also why * Economist *
An outstanding source of wise advice -- Times * Oliver Kamm *
A thoughtful guide, tough-minded and up to date, for people who think they can write well but are willing to believe that they could write better -- Henry Hitchings * Guardian *
A canny and punchy polemic -- Stevie Davies * Independent *
Steven Pinker is one of the world's most influential thinkers and writers on the human condition. His popular and highly praised books include The Better Angels of Our Nature, The Sense of Style, The Stuff of Thought, The Blank Slate, How the Mind Works, and The Language Instinct. The recipient of several major awards for his teaching, books, and scientific research, Pinker is Harvard College Professor and Johnstone Family Professor of Psychology at Harvard University. He also writes frequently for The New York Times, the Guardian and other publications. He has been named Humanist of the Year, Prospect magazine's "The World's Top 100 Public Intellectuals," Foreign Policy's "100 Global Thinkers," and Time magazine's "The 100 Most Influential People in the World Today."
GOR006098919
9781846145506
1846145503
The Sense of Style: The Thinking Person's Guide to Writing in the 21st Century by Steven Pinker
Steven Pinker
Used - Very Good
Hardback
Penguin Books Ltd
2014-09-04
368
N/A
Book picture is for illustrative purposes only, actual binding, cover or edition may vary.
This is a used book - there is no escaping the fact it has been read by someone else and it will show signs of wear and previous use. Overall we expect it to be in very good condition, but if you are not entirely satisfied please get in touch with us
Trustpilot