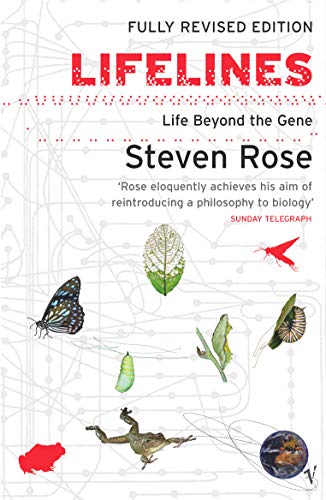 Used Price
$16.99
inc. GST
Free Shipping in Australia
In Lifelines, neuroscientist Steven Rose offers a theory of life that insists that we as humans - along with all living creatures - create our own futures, though in circumstances not of our own choosing.
Very Good Good Well Read

Lifelines: Life Beyond the Gene by Steven Rose

In Lifelines, neuroscientist Steven Rose offers a theory of life that insists that we as humans - along with all living creatures - create our own futures, though in circumstances not of our own choosing. Placing the organism at the centre of life, Rose directly confronts the ideology of reductionism and ultra-Darwinism, with its headline-grabbing insistence that all aspects of human life from sexual preference to infanticide, political orientation to violence, make domination to alcoholism, are in our genes and are the inevitable consequence of natural selection. Rose asserts that such claims are not merely socially naive, but fundamentally misunderstand the active and irreducible nature of living processes.

"In the current intellectual and political climate, there is a desperate need to return to the real biology of real organisms, including human beings, in a real world. For the general reader wanting to know how this might be done, there can be no better guide than Rose's book" * New Scientist *
"Written with admirable clarity and force... I can't imagine anyone who wanted enlightenment coming away from this book empty-handed" * Spectator *
"Essential reading for anyone interested in biology and evolution" * Times Higher Education Supplement *
"There is no denying his skill as a writer...a flowing, elegant scientific treatise" * Observer *

Steven Rose is Professor of Biology and Director of the Brain and Behaviour Research Group at The Open University, Visiting Professor in the Department of Anatomy and Developmental Biology at University College London, and, jointly with sociologist Hilary Rose, was the Professor of Physic (genetics and society) at Gresham College, London. His previous books include The Chemistry of Life (1996), Science and Society (with Hilary Rose) (1973), The Conscious Brain (1973), Molecules and Minds: Essays on Biology and the Social Order (1988), and The Making of Memory (1992). The Making of Memory won the 1993 Rhone-Poulenc Science Book Prize and he has received a variety of medals and international awards, most recently the Biochemical Society's special medal for science communication, the Edinburgh Medal and the silver medal of the Royal Scottish Society of Arts.