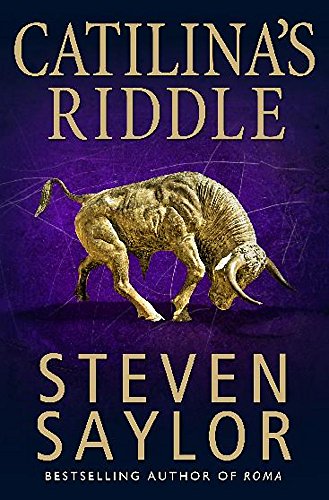 The year is 63BC, and Gordianus the Finder unexpectedly achieves the dream of every Roman - a farm in the Etruscan countryside. Vowinig to leave behind the corruption and intrigue of Rome, he abandons the city, taking his family with him.

Gordianus' longtime patron, Cicero, has also achieved the dram of his lifetime - a much coveted consulship, Rome's highest elected office. Urgently, he requests a favour of Gordianus: his help in keeping watch on a radical populist senator, Catilina, suspected of conspiring against the state. Against his will, Gordianus finds himself drawn deeper and deeper into a web of deceit, intrigute and murder.

A sweeping and marvellously evocative story, with page after page of authentic detail * Booklist *
It is Saylor's particular skill to sketch the political intrigues of the time with great authenticity... the sense that murky, terrible things are moving secretly beneath the surface of a fairly benign exterior increases in this brilliant novel * San Francisco Review of Books *
I can't say enough good things about Saylor's style, his scholarship or his mastery of the period. * The Poisoned Pen *
Reader's will escape with pleasure into this lush, meticulously researched world of ancient Rome. * Christian Science Monitor *
Really excellent...an enthralling recreation of time and place, fascinating storytelling. -- Derek Jacobi.

Steven Saylor's fascination with Ancient Rome began in childhood. A history graduate and former newspaper and magazine editor, he has now completed numerous novels featuring Gordianus the Finder. He lives in Berkeley, California.