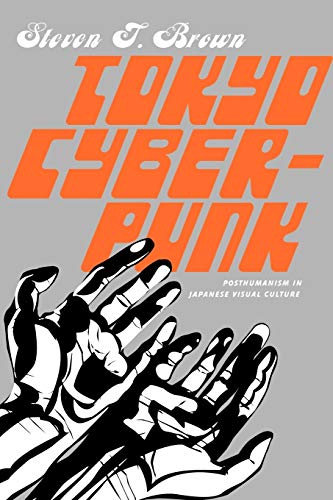 Engaging some of the most canonical and thought-provoking anime, manga, and science fiction films, Tokyo Cyberpunk offers insightful analysis of Japanese visual culture. Steven T. Brown draws new conclusions about the cultural flow of art, as well as important technological issues of the day.

Engaging some of the most canonical and thought-provoking anime, manga, and science fiction films, Tokyo Cyberpunk offers insightful analysis of Japanese visual culture. Steven T. Brown draws new conclusions about the cultural flow of art, as well as important technological issues of the day.

"Brown makes a highly important contribution to Japanese visual studies as a whole . . . An enjoyable and eminently readable text . . . It will be very much at home in Japanese studies courses focused on film, anime, and popular culture, as well as film and cultural studies courses focused on science fiction, technology, and posthumanism." - The Journal of Asian Studies

"It should prove of use to specialists in film studies and Japanese culture . . . Recommended." - CHOICE

"A welcome exploration of science fiction within 'Japanese visual culture' . . . Tokyo Cyberpunk is an exciting study that is at its best when it considers the transcultural theoretical value of Japanese visual culture. Its detailed bibliography makes it ideal for university library collections, as well as for teachers and researchers who are interested in the expansion and further complication of the existing work on sf, transnational cultural studies, and critical posthumanism." - Science Fiction Studies

"Tokyo Cyberpunk is hugely inspiring, precisely for the liberating effects of Brown's stance - which runs counter to the totalitarian, monolithic approach of most (or virtually all) film studies, be they historical or monographic. To anyone who has ever felt the slightest sense of amazement at Akira's epic post-apocalyptic visions, the merest excitement at Tetsuo's metallic mutations, or seen a glint of wonder reflected off a gynoid's glistening frame, this is a book that will make the synapses work overtime, providing total recall of that original moment and amplifying it a thousandfold. To anyone with the slightest interest in the power and potential of science fiction, Tokyo Cyberpunk is essential reading." - Tom Mes, MidnightEye.com

"Tokyo Cyberpunk is one of the best works I have ever read on Japanese popular culture. In fact, I would place it as one of the best works on recent popular culture in general that I have read. The topics are fascinating, important, and wide ranging. The analysis is thorough, imaginative, and sophisticated without being over-jargonated and unapproachable. The book is a genuine pleasure to read - stimulating, informative and even eye-opening at particular moments, when the author works through a wide and sometimes seemingly disparate variety of sources to open up a particular icon of cyberpunk (or should I say simply 'contemporary'?) culture." - Susan Napier, Professor of Japanese Studies, Tufts University and author of From Impressionism to Anime: Japan as Fantasy and Fan Cult in the Mind of the West

"Strikingly original in its conception, Tokyo Cyberpunk engages with critical rigor and artistic insight some of the most challenging Japanese live-action and animated films that interrogate the contours of an increasingly technologized humanity. Brown pushes his analyses past usual domestic readings into new transnational matrixes of meaning. Tsukamoto Shinya's cyberpunk classic Tetsuo: The Iron Man is recast in productive relationships within a globalized media environment that includes Fritz Lang's Metropolis and David Cronenberg's Videodrome in a way that compels us to watch all of these films (again) with deeper understanding and appreciation; Oshii Mamoru's Ghost in the Shell 2: Innocence is unpacked within a transnational grammar and dialogue of the posthuman from the dolls of Hans Bellmer to the cyborgs of Donna Haraway while Brown's treatment of Oshii's often overlooked Avalon opens up penetrating and timely discussions on the differences between analog and digital film and diminishing border between live-action versus anime. Informed but not overburdened by critical theory and committed to a transnational frame without ignoring local social contexts,Tokyo Cyberpunkpropels the reader on new lines of flight through contemporary Japanese visual media that peers just over the edge of our present." - Gerald Figal, Associate Professor of History and East Asian Studies, Vanderbilt University and author of Civilization and Monsters: Spirits of Modernity in Meiji Japan

STEVEN T. BROWN is a Professor of Japanese and Comparative Film & Popular Culture at the University of Oregon, USA.
Introduction: Posthumanism after AKIRA PART I: MACHINIC DESIRES: HANS BELLMER'S DOLLS AND THE TECHNOLOGICAL UNCANNY IN GHOST IN THE SHELL 2: INNOCENCE PART II: DESIRING MACHINES: BIOMECHANOID EROS AND OTHER TECHNO-FETISHES IN TETSUO: THE IRON MAN AND ITS PRECURSORS PART III: CONSENSUAL HALLUCINATIONS AND THE PHANTOMS OF ELECTRONIC PRESENCE IN KAIRO AND AVALON Conclusion: Software in a Body: Critical Posthumanism and Serial Experiments Lain
GOR011139847
Tokyo Cyberpunk: Posthumanism in Japanese Visual Culture by Steven T. Brown
Steven T. Brown
Used - Good
Paperback
Palgrave Macmillan
2010-09-10
256
023010360X
9780230103603
N/A
Book picture is for illustrative purposes only, actual binding, cover or edition may vary.
This is a used book - there is no escaping the fact it has been read by someone else and it will show signs of wear and previous use. Overall we expect it to be in very good condition, but if you are not entirely satisfied please get in touch with us
Trustpilot