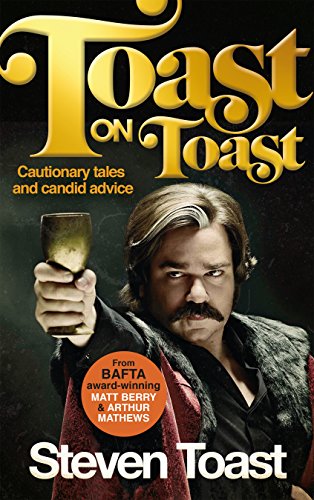 Toast on Toast
by Steven Toast

Used Price
$23.49
inc. GST
Free Shipping in Australia
Hot on the heels of the critical hit Toast of London, this memoir-slash-acting-guide is Steven Toast through and through, each word personally selected for maximum (bombastic) emphasis. Welcome to his world, and be inspired by this genius who happens to boast the most luxuriant quiff-and-tache combination in showbiz.
Very Good

In Toast on Toast - part memoir, part 'how to act' manual - Steven Toast draws on his vast and varied experiences, providing the reader with an invaluable insight into his journey from school plays to RADA, and from 'It's a Right Royal Knockout' to the Colony Club. Along the way, he reveals the secrets of his success. He discloses how to brush up on and expand your technical and vocal skills, how to nail a professional voiceover, and how to deal with difficult work experience staff in a recording studio. He also reveals the dangers of typecasting, describes the often ruthless struggle for 'top billing', and shares many awesome nuggets of advice. The end result is a book that will inspire and educate anyone who wants to tread the floorboards. It will also inform (and entertain) anybody who simply wants to discover what a jobbing actor's life is actually like. Includes a detailed index for quick and easy orientation.

Hold on to your breeches for some 'cautionary tales and candid advice' from everyone's favourite struggling actor extraordinaire. The man with the propensity for doing it doggy style with the wife of an actorly rival might not be best placed to spread his wisdom to young upstarts of stage and screen. But that's exactly what he does here in Toast On Toast, with memories of everything from RADA to It's a Right Royal Knockout * * The List * *
Steven Toast is the comedy character of the moment, and Toast of London is the comedy event. Brilliant * * Guardian on TOAST OF LONDON * *
The funniest thing on telly, while also being blithering nonsense of the highest order * * Evening Standard on TOAST OF LONDON * *
What a glorious, surreal thing it is * * Herald on TOAST OF LONDON * *

Matt Berry is a writer, actor, comedian and musician. He co-writes and stars as Steven Toast in Channel 4's cult comedy show Toast of London. He played Douglas Reynholm, the bombastic and sexist boss in The IT Crowd, and Beef in Vic Reeves and Bob Mortimer's House of Fools. He is also known for his appearances in The Mighty Boosh and Garth Marenghi's Darkplace. Berry wrote, starred, and composed all the music in the comedy show Snuff Box on BBC Three with Rich Fulcher. He also co-wrote and performed in a parody rock opera, AD/BC: A Rock Opera, with Richard Ayoade, which also stars Noel Fielding and Julian Barratt. Arthur Mathews is an Irish comedy writer and actor, who is best known for Father Ted, which he co-wrote with Graham Linehan. He has also contributed to The Fast Show, Harry Enfield and Chums, Brass Eye and he has co-written Toast of London with Matt Berry.

GOR006991129
Toast on Toast: Cautionary tales and candid advice by Steven Toast
Steven Toast
Used - Very Good
Hardback
Canongate Books Ltd
2015-10-22
224
1782117490
9781782117490
N/A
Book picture is for illustrative purposes only, actual binding, cover or edition may vary.
This is a used book - there is no escaping the fact it has been read by someone else and it will show signs of wear and previous use. Overall we expect it to be in very good condition, but if you are not entirely satisfied please get in touch with us.