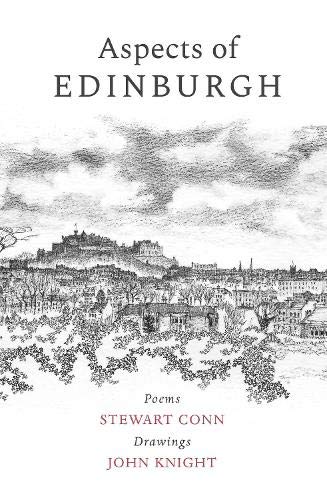 Aspects of Edinburgh by Stewart Conn

The history and character of Edinburgh inspire every piece in Stewart Conn's new collection. Stewart's poems, paired with John Knight's beautifully detailed illustrations evoke the spirit of the city and its unique aspects. Knight's pieces are not simply illustrative. This work is a collaboration between architect and poet.

'North-east the Firth, a bracelet
merging with mist; south-west
the Pentlands, sharply defined.
Directly opposite, the Castle.
A sudden gust makes me lose
my footing. Gulls slip past,
eyeing us disdainfully.'
- from From Arthur's Seat

The history and character of Edinburgh infuse every piece in Stewart Conn's new collection. Stewart's poems, paired with John Knight's beautifully detailed illustrations evoke the spirit of the city and its unique aspects. Knight's pieces are not simply illustrative. The poems and illustrations complement and enhance each other, showing us how the essence of the city infuses every stone.

From 2002 to 2005 Stewart Conn was Edinburgh's inaugural makar, or poet laureate. Publications include An Ear to the Ground (Poetry Book Society Choice); Stolen Light (shortlisted for the Saltire Prize), The Breakfast Room (2011 Scottish Poetry Book of the Year) and most recently a new and selected volume The Touch of Time (Bloodaxe), plus The Loving-Cup, Estuary and Against the Light (Mariscat Press). Distances, a personal evocation of people and places, was published by the Scottish Cultural Press. And he edited 100 Favourite Scottish Poems and 100 Favourite Scottish Love Poems for Luath. Of his plays The Burning, The Aquarium, Play Donkey and Clay Bull were premiered by the Edinburgh Royal Lyceum Company; while Herman and Hugh Miller won Fringe First Awards. A fellow of the RSAMD and an honorary fellow of the Association of Scottish Literary Studies, he can be heard reading from his own work on The Poetry Archive. His website is www.stewartconn.com.

Closely allied to his work as an architect with Historic Scotland (now Historic Environment Scotland), John Knight's drawing skills were honed through observation of the many historic buildings the length and breadth of Scotland he worked on for 25 years. In 1974 he was commissioned by East Lothian District Council to draw thirteen East Lothian villages for heritage display boards - published subsequently as a book - requiring some 90 sketches. More recently he was asked, by the local history society, to prepare a set for East Linton. Also in the 1970s he was commissioned to provide illustrations of the houses associated with Robert Louis Stevenson in Edinburgh for James Pope-Hennessy's biography of the author. His work has been included in mixed exhibitions at galleries including the Talbot Rice and the Fine Art Society, and a collection of his drawings taken into the Historic Environment Scotland archive will shortly be accessible online. On retirement as a Principal Architect in 2002 he was awarded the OBE.

GOR010949217
9781910895283
1910895288
Aspects of Edinburgh: Poems by Stewart Conn Drawings by John Knight by Stewart Conn
Stewart Conn
Used - Very Good
Paperback
Scotland Street Press
2019-06-25
56
N/A
Book picture is for illustrative purposes only, actual binding, cover or edition may vary.
This is a used book - there is no escaping the fact it has been read by someone else and it will show signs of wear and previous use. Overall we expect it to be in very good condition, but if you are not entirely satisfied please get in touch with us
Trustpilot