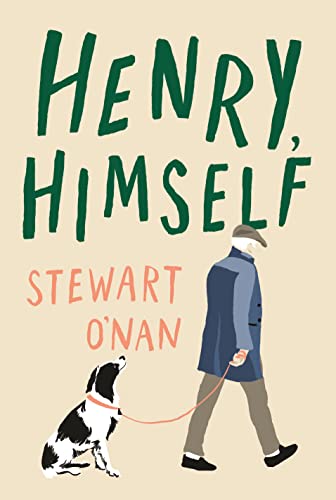 Henry, Himself by Stewart O'Nan

Stewart O'Nan is renowned for illuminating the unexpected grace of everyday life and the resilience of ordinary people with humour, intelligence and compassion. In Henry, Himself he offers an unsentimental, moving life story of a twentieth-century everyman.

Henry, Himself by Stewart O'Nan

Soldier, son, lover, husband, breadwinner, churchgoer, Henry Maxwell has spent his whole life trying to live with honour. A native Pittsburgher and engineer, he's always believed in logic, sacrifice and hard work. Now, seventy-five and retired, he feels the world has passed him by. It's 1998, the American century is ending, and nothing is simple any more. His children are distant, their unhappiness a mystery. Only his wife, Emily, and dog, Rufus, stand by him.

Once so confident, as Henry's strength and memory desert him, he weighs his dreams against his regrets and is left with questions he can't answer: Is he a good man? Has he done right by the people he loves? And with time running out, what, realistically, can he hope for?

Henry, Himself is a wry, warmhearted portrait of an American original - a man who believes he's reached a dead end only to discover life is full of surprises.

Beautifully spare and poignant . . . a novel that charms not through its plot, but through its subtle revelations of character and the human condition. * New York Times Book Review *
O'Nan has returned to the mode that marks his best work, capturing America's shaky middle class with dignity . . . Tracking Henry's subtle interplay with [his wife] Emily, and the unspoken mysteries that concern him, O'Nan reveals a rich inner life. * Minneapolis Star Tribune *
As usual, this profoundly unpretentious writer employs lucid, no-frills prose to cogently convey complicated emotions and fraught family interactions...Astute and tender, rich in lovely images and revealing details - another wonderful piece of work from the immensely gifted O'Nan. * Kirkus (starred review) *
Charming, meditative, gently funny, and stealthily poignant...Like Richard Russo and Anne Tyler, O'Nan discerningly celebrates the glory of the ordinary in this pitch-perfect tale of the hidden everyday valor of a humble and good man. * Booklist *
Engaging and immersive . . . One of O'Nan's gifts is his ability to craft his characters with such uncanny attention to detail that the reader comes to care for them as the author does . . . [A] poignant, everyman story. * Book Page *
O'Nan, with some of his most gorgeous writing, [provides] Henry instances of unexpected grace . . . This novel is a lovely tribute to the enduring mystery of an ordinary life. * Pittsburgh Post-Gazette *
Stewart O'Nan is the author of numerous books, including West of Sunset, The Odds, Emily Alone, Snow Angels, Songs for the Missing and A Prayer for the Dying. His 2007 novel, Last Night at the Lobster, was a national bestseller and a finalist for the Los Angeles Times Book Prize. He was born and raised in Pittsburgh, where he lives with his family.
NGR9781911630340
9781911630340
1911630342
Henry, Himself by Stewart O'Nan
Stewart O'Nan
New
Paperback
Atlantic Books
2020-04-02
384
N/A
Book picture is for illustrative purposes only, actual binding, cover or edition may vary.
This is a new book - be the first to read this copy. With untouched pages and a perfect binding, your brand new copy is ready to be opened for the first time
Trustpilot