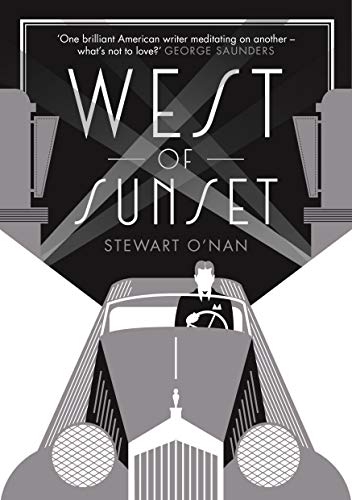 West of Sunset by Stewart O'Nan

West of Sunset by Stewart O'Nan

In 1937, F. Scott Fitzgerald was a troubled, uncertain man whose literary success was long behind him. In poor health, with his wife consigned to a mental asylum and his finances in ruin, he struggled to make a new start as a screenwriter in Hollywood.

The last three years of Fitzgerald's life, often obscured by the legend of his earlier Jazz Age glamour, are the focus of Stewart O'Nan's heartfelt new novel. With flashbacks to key moments from Fitzgerald's past, the story follows him as he arrives on the MGM lot, falls in love with brassy gossip columnist Sheilah Graham, begins work on The Last Tycoon, and tries to maintain a semblance of family life with the absent Zelda and their daughter, Scottie.

Fitzgerald's orbit of literary fame and the Golden Age of Hollywood is brought vividly to life through the novel's romantic cast of characters, from Dorothy Parker and Ernest Hemingway to Humphrey Bogart. Written with striking grace and subtlety, this wise and intimate portrait of a man trying his best to hold together a world that's flying apart, if not gone already, is an American masterpiece.

The heart of the novel is his penetrating description of Fitzgerald's troubled self. * The Sunday Times *
Some of O'Nan's most suggestive passages conjure the feeling of freefall that can accompany uncontrollable change. * Guardian *
Mesmerising and haunting...The strings O'Nan pulls so deftly are really the mark of a consummate pro, along the lines of Fitzgerald himself. * Boston Globe *
[A] gorgeous new novel... O'Nan is a writer alert to the courage and beauty inherent in the stories of people who simply have to keep on keeping on... "The Love of the Last Tycoon," even though unfinished, is a pretty fine Hollywood novel. "West of Sunset" is a pretty fine Hollywood novel, too, but it's an even finer novel about a great writer's determination to keep trying to do his best work, to keep reaching for "the silver pepper of the stars," even at a time when he was universally dismissed as a has-been. * Washington Post *
O'Nan's adroitness with atmosphere and period detail makes Fitzgerald's dreams of creating worthy work, even with his best days behind him, absorbing and poignant. * The New Yorker *
O'Nan is serious in his attempt to dig deep into Fitzgerald and his genius. And he does it rather affectingly... Scott's pain is palpable but O'Nan's prose glitters in response. * The Big Issue *
O'Nan... skilfully pulls us into Fitzgerald's gilded and yet familiar world. He brings the Hollywood legends to life. By the end, they feel like friends. * Chicago Tribune *
With West of Sunset, one brilliant American novelist has taken on another... big-hearted and fascinating. * Seattle Times *
The beautifully realised Zelda sections strike a minor, elegiac chord...they let us imagine what it might have been like inside Fitzgerald's brilliant, tortured mind. * New York Times *
A stunning account of F. Scott Fitzgerald's final years... With tremendous artistry, O'Nan shows in West of Sunset how one of the finest and most tragic American writers discovered not only a late creative lease on life but also a new love. * The Australian *
A wonderfully intimate and gently absorbing book. It inhabits an era and a fine mind with great care, folding in details of Fitzgerald's life with subtle unhurried sympathy. * Wales on Sunday *
O'Nan has written a wonderfully intimate and gently absorbing book. * Gloucestershire Echo *
[He] brings depth and tenderness to the awkward love affair between Fitzgerald and the gossip columnist Sheilah Graham. * Mail on Sunday *
Atmospheric West of Sunset re-imagines the last three troubled years of Fitzgerald's life... Stunning. * The Herald *
The last three years of American writer F Scott Fitzgerald's life, often obscured by the legend of his earlier Jazz Age glamour, are the focus of Stewart O'Nan's heartfelt new novel. * Lincolnshire Echo *
West of Sunset focuses on these last, darkly difficult years, folding in details of Fitzgerald's life with subtle, unhurried sympathy. The result is a fine portrait of grace under pressure and moral courage. * Burnley Express *
Stewart O'Nan is the author of fourteen previous novels, including The Odds; Emily, Alone; A Prayer for the Dying; and Snow Angels, as well as several works of nonfiction, including, with Stephen King, the bestselling Faithful. His novel Last Night at the Lobster was a US bestseller and finalist for the Los Angeles Times Book Prize. He was born and raised in Pittsburgh where he lives with his family.
GOR007029607
9781925266092
1925266095
West of Sunset by Stewart O'Nan
Stewart O'Nan
Used - Very Good
Hardback
Allen & Unwin
2015-07-02
304
N/A
Book picture is for illustrative purposes only, actual binding, cover or edition may vary.
This is a used book - there is no escaping the fact it has been read by someone else and it will show signs of wear and previous use. Overall we expect it to be in very good condition, but if you are not entirely satisfied please get in touch with us
Trustpilot