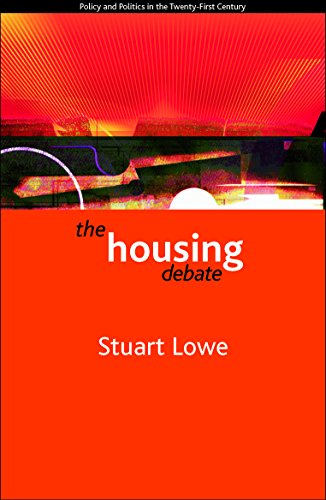 The housing debate
by Stuart Lowe

Used Price
$34.99
inc. GST
Free Shipping in Australia
The key debate in this timely book is whether social policy and people's homes should be so closely connected, especially when housing markets are so volatile. The author argues that housing, having been a relatively neglected field of public policy, is now rightfully re-established as a major pillar of the post-industrial welfare state.
Like New Very Good

The housing debate by Stuart Lowe

The emergence of Britain as a fully fledged home-owning society at the end of the 20th century has major implications for how houses are used not just as a home but as an asset. The key debate in this important and timely book is whether social policy and people's homes should be so closely connected, especially when housing markets are so volatile. It will be essential reading for all students and practitioners of housing and those concerned with how social and public policy is being shaped in the 21st century.

'Stuart Lowe's The Housing Debate takes a refreshingly broad view of housing and welfare. Rather than a balanced introduction for students to current debates around housing and social policy, Lowe has a clear case to make.' - Jake Eliot in Citizen's Income Newsletter
"Very clear and concise overview of key developments in housing policy. Provides an excellent introduction to housing studies." Tony Manzi, University of Westminster
"The Housing Debate ... provides readers with a solid historical, geographic and theoretical foundation." British Politics and Policy at the LSE blog, March 2012
"Concise and very clear discussion of contemporary and historical developments in housing policy" Tony Manzi, University of Westminster
"We are increasingly having to rely on housing wealth to fund many aspects of our life including retirement when recent experience of the housing market shows that this can be a risky strategy. This book offers a timely re-assessment of the role of housing in social policy. " David Clapham, Cardiff University
"By giving us both the longterm and the big picture Stuart Lowe illuminates both the importance of housing to wider debates about welfare and the divides and contradictions inherent in today's housing debates." Caroline Hunter, University of York
"In this highly readable and well-informed text, Stuart Lowe makes a compelling case for the central role played by housing in modern welfare state regimes...a key resource for students of social policy, economics and housing studies. Overall, it represents a major contribution to housing studies and to the wider welfare state literature." Journal of Social Policy

Stuart Lowe is Senior Lecturer in Social Policy at the University of York. He is a political scientist interested particularly in housing policy, about which he has written extensively. His books include Urban Social Movements and Housing Policy Analysis (both Palgrave Macmillan) and a best-selling textbook with John Hudson, Understanding the Policy Process (The Policy Press). His recent research focuses on the relationship between housing and welfare state change.

The foundations; The idea of housing policy: the crisis of the late-Victorian housing market; The birth of the home-owning society: the interwar years (1918-39); Home-ownership comes of age (the post-war decades (1945-79); The post-industrial economy and housing; Housing and welfare states; The globalisation of the mortgage market;Towards asset-based welfare states; Conclusion.

GOR010739605
The housing debate by Stuart Lowe
Stuart Lowe
Used - Like New
Paperback
Policy Press
2011-09-14
280
184742273X
9781847422736
N/A
Book picture is for illustrative purposes only, actual binding, cover or edition may vary.
The book has been read, but looks new. The book cover has no visible wear, and the dust jacket is included if applicable. No missing or damaged pages, no tears, possible very minimal creasing, no underlining or highlighting of text, and no writing in the margins.