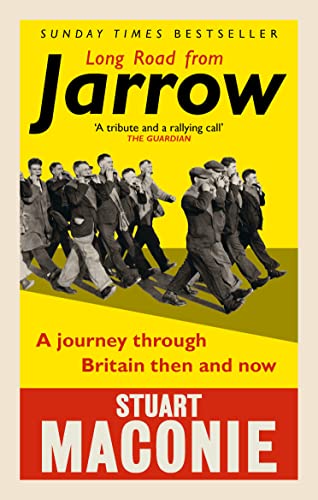 In Stock
$21.99
inc. GST
Now we are nation of vaping and nail salons, pulled pork and salted caramel.

In the autumn of 1936, some 200 men from the Tyneside town of Jarrow marched 300 miles to London in protest against the destruction of their towns and industries.

Long Road from Jarrow: A journey through Britain then and now by Stuart Maconie

'A tribute and a rallying call' - Guardian

Three and half weeks. Three hundred miles. I saw roaring arterial highway and silent lanes, candlelit cathedrals and angry men in bad pubs. The Britain of 1936 was a land of beef paste sandwiches and drill halls. Now we are nation of vaping and nail salons, pulled pork and salted caramel.

In the autumn of 1936, some 200 men from the Tyneside town of Jarrow marched 300 miles to London in protest against the destruction of their towns and industries. Precisely 80 years on, Stuart Maconie, walks from north to south retracing the route of the emblematic Jarrow Crusade.

Travelling down the country's spine, Maconie moves through a land that is, in some ways, very much the same as the England of the 30s with its political turbulence, austerity, north/south divide, food banks and of course, football mania. Yet in other ways, it is completely unrecognisable.

Maconie visits the great cities as well as the sleepy hamlets, quiet lanes and roaring motorways. He meets those with stories to tell and whose voices build a funny, complex and entertaining tale of Britain, then and now.

A tribute and a rallying call * The Guardian *
Maconie's book is not only a heartfelt tribute to Wilkinson and the marchers, but a reaffirmation of the role of the personal within the political, and a rallying call for anyone stirred by the story of Jarrow * The Observer *
With yet another conservative government refusing to budge it is hard to avoid Maconie's conclusion that persuading the uncommitted is as vital as ever * New Statesman *
The result is this rich, evocative book. Part travelogue, part history, part examination of a nation in flux. It is all a delight **** * Mail on Sunday, EVENT Magazine *
Footsore in spacetime, hiking simultaneously through memory and landscape, in Long Road from Jarrow Stuart Maconie shadows the defiant, desperate and dignified crusade of 1936 through a modern world where everything has changed except for the austerity, the poverty, the national and global instability, the worrying ascendancy of fascism, and the resilient decency of ordinary people. This is a necessary book; a necessary journey through English identity, and one which you'll be glad that you embarked on. Now, yes, now is the hour. -- Alan Moore

Stuart Maconie is a writer, broadcaster and journalist familiar to millions from his work in print, on radio and on TV. His previous bestsellers have included Cider with Roadies, Pies and Prejudice and Adventures on the High Teas, and he currently hosts the afternoon show on BBC 6music with Mark Radcliffe as well as weekly show The Freak Zone. Based in the cities of Birmingham and Manchester, he can also often be spotted on top of a mountain in the Lake District with a Thermos flask and individual pork pie.

GOR009036491
Long Road from Jarrow: A journey through Britain then and now by Stuart Maconie
Stuart Maconie
Used - Like New
Paperback
Ebury Publishing
2018-04-15
384
178503054X
9781785030543
N/A
Book picture is for illustrative purposes only, actual binding, cover or edition may vary.
The book has been read, but looks new. The book cover has no visible wear, and the dust jacket is included if applicable. No missing or damaged pages, no tears, possible very minimal creasing, no underlining or highlighting of text, and no writing in the margins.