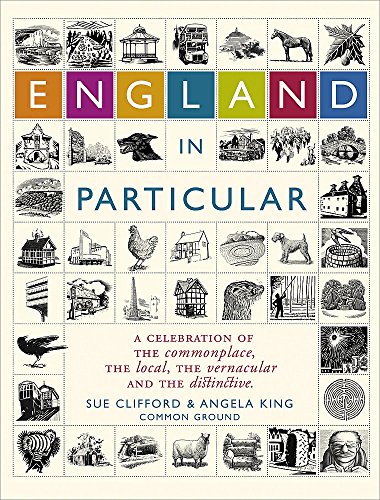 England In Particular
by Sue Clifford And Angela King

A magnificent, unique and ground-breaking book about English local distinctiveness, that will appeal to devotees of Simon Jenkins and Flora Britannica.
'It should be at every curious Englishman's bedside.' - Alan Titchmarsh

England In Particular: A celebration of the commonplace, the local, the vernacular and the distinctive by Sue Clifford And Angela King

'Should be at every curious Englishman's bedside' ALAN TITCHMARSH

'As vital as it is joyous, and as timely as it is inspired . . . It should join Shakespeare and the Bible as a "must have" on any English man or woman's desert island' HUGH FEARNLEY-WHITTINGSTALL

England is a land of extraordinary variety, rich in buildings, landscapes, peoples and wildlife. But this diversity is under siege. Mass production, fashion, increased mobility and the forceful promotion of corporate identity have brought with them standardised shop fronts, farm buildings, factories, forests and front doors, while intensive farming has created a bland, empty countryside.

ENGLAND IN PARTICULAR is a counterblast against loss and uniformity, and a celebration of just some of the distinctive details that cumulatively make England. It is the culmination of more than twenty years' work by Sue Clifford and Angela King, who founded Common Ground with Roger Deakin.

ENGLAND IN PARTICULAR is a ground-breaking work, destined to become a classic.

It should be at every curious Englishman's bedside. * Alan Titchmarsh *
This book is a joy. -- Monty Don
A living portrait of England here and now, with all the narrative and mystery of the past attached ... The book is gracefully written, phenomenally knowledgeable, and simply exhilarating, speaking as it does of the extraordinary things that are all around us, if we are only prepared to open our eyes to them. * Fay Weldon *
As vital as it is joyous, and as timely as it is inspired ... It should join Shakespeare and the Bible as a "must have" on any English man or woman's desert island. * Hugh Fearnley-Whittingstall *
An entrancing green alphabet ..."The land is our most elaborate storyboard," say Sue Clifford and Angela King as they demonstrate this truth in seemingly countless small essays, each one a brief masterpiece of combined natural and social history ... this is a book for all English seasons and for every English mile * Ronald Blythe *
This wise and witty and broad-shouldered celebration (it ranges from accents and airfields to wrestling and zigzags) is the triumphant fruition of their work with Common Ground. * Richard Mabey *
A magical celebration of English diversity and a much-needed wake-up call as we sleepwalk further into the dreary global monoculture. * Zac Goldsmith *
Angela King and Sue Clifford have been pursuing this quarry for more than 30 years and it would be difficult to imagine anyone encompassing more of England between two covers. -- Adam Nicolson * Evening Standard *
This is one of the most handsome books I've come across in a long while. -- Paul Kingsnorth * Independent *
ENGLAND IN PARTICULAR does everything that the ideal grandmother would, with equal charm and perhaps an even greater depth of accuracy and information. It should become part of every well-organised family. -- Clive Aslet

About Sue Clifford And Angela King

Sue Clifford and Angela King founded the charity Common Ground in 1983 to promote local distinctiveness in all its forms and to campaign against the homogenisation of our surroundings. They have published many books, pamphlets and manifestos, and were behind the magnificent Flora Britannica project.

GOR001379370
England In Particular: A celebration of the commonplace, the local, the vernacular and the distinctive by Sue Clifford And Angela King
Sue Clifford And Angela King
Used - Very Good
Hardback
Hodder & Stoughton General Division
2006-05-22
528
0340826169
9780340826164
N/A
Book picture is for illustrative purposes only, actual binding, cover or edition may vary.
This is a used book - there is no escaping the fact it has been read by someone else and it will show signs of wear and previous use. Overall we expect it to be in very good condition, but if you are not entirely satisfied please get in touch with us.