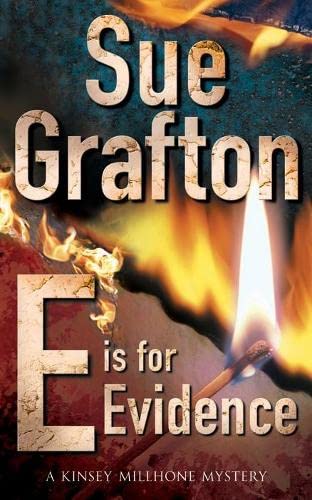 E is for Evidence
by Sue Grafton

E is for Evidence Summary

E is for Evidence by Sue Grafton

Anyone who knows me will tell you that I cherish my unmarried state. I'm female, twice divorced, no kids and no close family ties. I'm perfectly content to do what I do . . .

It was two days after Christmas when Kinsey Millhone received the bank slip showing a credit for five thousand dollars.

The account number was correct but Kinsey hadn't made the deposit.

Then came the phone call and suddenly everything became clear. The frame-up was working and Kinsey was trapped . . .

`Grafton on form yet again' The Times

GOR000378385
E is for Evidence by Sue Grafton
Sue Grafton
Used - Very Good
Paperback
Pan Macmillan
1990-09-14
320
0330315862
9780330315869
N/A
Book picture is for illustrative purposes only, actual binding, cover or edition may vary.
This is a used book - there is no escaping the fact it has been read by someone else and it will show signs of wear and previous use. Overall we expect it to be in very good condition, but if you are not entirely satisfied please get in touch with us.