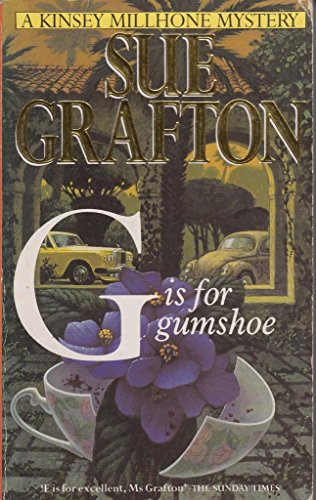 G is for Gumshoe
by Sue Grafton

G is for Gumshoe Summary

G is for Gumshoe by Sue Grafton

For the record, the name is Kinsey Millhone. Private investigator. One hundred and eighteen pounds of female in a five-foot six-inch frame. Just turned thirty-three (after what seemed like an interminable twelve months of being thirty-two) . . .

Three things happened on May 5, the day everyone sang `Happy Birthday' to Kinsey Millhone.

The repairs were completed on her apartment, and she moved back in. She was hired by Mrs Clyde Gersh to bring her mother back from the Mojave Desert.

And lastly, a real surprise. The news that she'd made one of the top slots on Tyrone Patty's hit list . . .

GOR000535637
G is for Gumshoe by Sue Grafton
Sue Grafton
Used - Very Good
Paperback
Pan Macmillan
1991-10-25
400
0330317237
9780330317238
N/A
Book picture is for illustrative purposes only, actual binding, cover or edition may vary.
This is a used book - there is no escaping the fact it has been read by someone else and it will show signs of wear and previous use. Overall we expect it to be in very good condition, but if you are not entirely satisfied please get in touch with us.