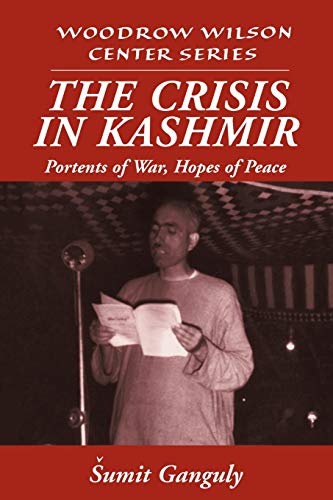 The Crisis in Kashmir
by Sumit Ganguly

Used Price
$17.49
inc. GST
Free Shipping in Australia
This book traces the origins of the insurgency in Indian-controlled Jammu and Kashmir. The first theoretically-grounded account, it is based on extensive interviews. Professor Ganguly's central argument is that the insurgency can be explained by political mobilisation and institutional decay.
Reviews:
Trustpilot
Very Good

The Crisis in Kashmir Summary

The Crisis in Kashmir: Portents of War, Hopes of Peace by Sumit Ganguly

This book traces the origins of the insurgency that has wracked the Indian-controlled portion (about two-thirds) of Jammu and Kashmir since 1989. The most complete, and the first theoretically grounded account, it is based on extensive interviews. Professor Ganguly's central argument is that the insurgency can be explained by the interlinked processes of political mobilisation and institutional decay. In an attempt to woo the citizens of India's only Muslim-majority state, the national government dramatically helped expand literacy, mass media, and higher education in Jammu and Kashmir. These processes produced a generation of Kashmiris who were politically knowledgeable and sophisticated. Simultaneously, the national government in New Delhi, fearful of potential secessionist proclivities amongst the Kashmiris, systematically stultified the development of political institutions in the state. Unable to express dissent in an institutional context, this new generation of Kashmiris resorted to violence.

Customer Reviews - The Crisis in Kashmir

The Crisis in Kashmir Reviews

Sumit Ganguly is the Rabindranath Tagore Professor of Indiana Cultures and Civilizations and Director of the India Studies Institute at Indiana University in Bloomington, Indiana. He is an expert on the international relations of the countries of South Asia; ethnic, nationalist, and religious violence; and nuclear politics.

Acknowledgements; Introduction; Maps; 1. The Kashmir conundrum; 2. Political mobilization and the onset of the insurgency; 3. The past as contrast; or, the dog that didn't bark; 4. Another war and Mrs. Gandhi's legacy; 5. The proximate causes: the Rajiv-Farooq accord and the outbreak of the insurgency; 6. The crisis worsens; 7. Strategies and options for resolving the crisis; Epilogue; Appendices; Index.

GOR004761211
The Crisis in Kashmir: Portents of War, Hopes of Peace by Sumit Ganguly
Sumit Ganguly
Woodrow Wilson Center Press
Used - Very Good
Paperback
Cambridge University Press
1999-02-13
204
0521655668
9780521655668
N/A
Book picture is for illustrative purposes only, actual binding, cover or edition may vary.
This is a used book - there is no escaping the fact it has been read by someone else and it will show signs of wear and previous use. Overall we expect it to be in very good condition, but if you are not entirely satisfied please get in touch with us.