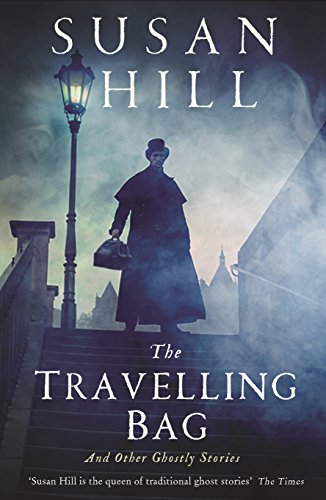 The Travelling Bag
by Susan Hill

The Travelling Bag: And Other Ghostly Stories by Susan Hill

From the foggy streets of Victorian London to the eerie perfection of 1950s suburbia, the everyday is invaded by the otherworldly in this unforgettable collection of new ghost stories from the bestselling author of The Woman in Black. In the title story, on a murky evening in a club off St James, a paranormal detective recounts his most memorable case, one whose horrifying denouement took place in that very building. A lonely boy makes a friend in 'Boy Number 21', but years later is forced to question the very nature of that friendship. 'Alice Baker' tells the story of a mysterious new office worker who is accompanied by a lingering smell of decay. And in 'The Front Room', a devoutly Christian mother tries to protect her children from the evil influence of their grandmother, both when she is alive and afterwards. This paperback edition includes the chilling 'Printer's Devil Court' in which three medical students make an unholy pact whose consequences will pursue one of them to the grave - and perhaps beyond. This is Susan Hill at her best, telling characteristically creepy and surprising tales of thwarted ambition, terrifying revenge and supernatural stirrings that will leave you wide-awake long into the night.

Traditional ghost stories of wonderful elegance ... Hill builds an atmosphere of creepiness in very few words; the pictures she creates in these stories are unforgettable -- Kate Saunders * The Times *
Hill knows how to chill you to the bone in the most disarming way ... This collection digs deep into the human psyche, exploring its hinterland for paranormal disturbance ... With consummate artistry, Hill creates stories that prowl around your mind, coming at you from unexpected angles, invading your senses. Perhaps read them out loud to a friend? Advantage: there's safety in numbers. * Daily Mail *
Susan Hill proves yet again that she really is the master of the supernatural. -- Fanny Blake * Woman and Home *
Authentically unnerving -- Tim Martin * Daily Telegraph *
Hill knows more than most how to send a shiver up the spine -- Ian Rankin
Master of horrors ... absurdly terrifying ... Hill evokes the sense with all her customary unnerving economy - but it's the cruelties of human interaction that give these stories, set in clubs and colleges, offices, boarding schools and suburban homes, their bite. The last, in particular, will have readers' hearts banging at their ribs well after they have closed the book. -- Imogen Russell Williams * Metro *
A ghoulish little volume ... These four expertly spun tales haunt and chill. * Country Life *
Spine-tingling ... chilling ... a skilfully crafted collection to delight fans of the supernatural ... Read it home alone at your peril. * Daily Express *
The mistress of the macabre presents four eerie tales * Press Association *
Praise for Susan Hill: 'Susan Hill is the grande dame of English supernatural fiction * Financial Times *
Part of the fear she conjures up is a sense that this could happen to anyone * Scotsman *
She is incontrovertibly, unarguably the best in the field -- Barry Forshaw * Independent *
Susan Hill is the queen of the traditional ghost story * The Times *
The high priestess of spine-tingling supernatural fiction, Susan Hill is one of those writers who always grips and entertains. * Emerald Street *
Brilliantly crafted and subtly spooky stories by the master of the uncanny ... spine-chilling * The Lady *

Susan Hill is the winner of numerous literary prizes. In 2012, she was awarded a CBE for her services to literature. Author of the Simon Serrailler crime series and numerous other novels, her literary memoir Howard's End is on the Landing and the ghost stories The Man In The Picture, The Small Hand, Dolly and Printers Devil Court are all published by Profile. The Woman in Black, which was has been running in the West End for over twenty-five years, and was a huge film in 2012, is published by Profile in hardback.

GOR008775397
The Travelling Bag: And Other Ghostly Stories by Susan Hill
Susan Hill
Used - Like New
Paperback
Profile Books Ltd
2017-09-28
288
1781256209
9781781256206
N/A
Book picture is for illustrative purposes only, actual binding, cover or edition may vary.
This is a used book - there is no escaping the fact it has been read by someone else and it will show signs of wear and previous use. Overall we expect it to be in very good condition, but if you are not entirely satisfied please get in touch with us.