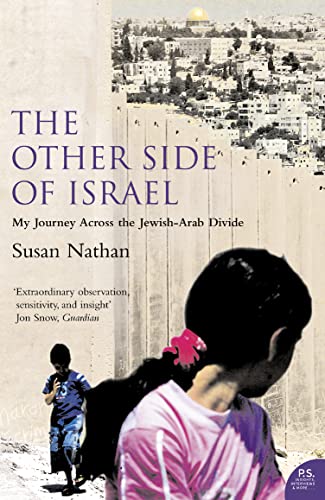 The Other Side of Israel
by Susan Nathan

The pioneering autobiographical story of a British Zionist in her fifties who moves to Israel and chooses to live among 25,000 Muslims in the all-Arab Israeli town of Tamra, a few miles from Nazareth.

The Other Side of Israel Summary

The Other Side of Israel: My Journey Across the Jewish/Arab Divide by Susan Nathan

The pioneering autobiographical story of a British Zionist in her fifties who moves to Israel and chooses to live among 25,000 Muslims in the all-Arab Israeli town of Tamra, a few miles from Nazareth.

Susan Nathan's revelatory book about her new life across the ethnic divide in Israel is already creating international interest. At a time when Middle Eastern politics (in many ways central to the current world disorder) have become mired in endless tit-for-tat killings, Susan Nathan is showing - by her own daily example - that it is perfectly possible for Jews and Arabs to live peacefully together in a single community, recognising their common humanity.

The author's familiarity with the former injustices of apartheid South Africa enables her to draw telling comparisons with the state of Israel. The increasing segregation of, and discrimintation against, the million-strong Arabic population of Israel is something she witnesses at first hand, but in describing her experiences in Tamra she is as observant of Arab frailties as of Jewish oppression.

Written with warmth, compassion and humour, `The Other Side of Israel' is one courageous woman's positive life-enhancing response to a situation in which entrenched attitudes lead only to more violence and bloodshed.

Customer Reviews - The Other Side of Israel

The Other Side of Israel Reviews

`"The Other Side of Israel" is a deeply troubling book. It should be read by anyone who wants to understand the reality of life for the Arab citizens of Israel. Susan Nathan's story bears witness to the shameful discrimination routinely practiced against them by the Israeli authorities. Her experience transforms her from an ardent Zionist into an eloquent but sorrowful critic of the state she had previously revered. Her account is the more telling because she writes with just as much warmth about her Jewish friends as she displays towards the Palestinians who befriend her. This important book not only has the ring of truth about it but an aura of hope as well.' Jonathan Dimbleby

`"The Other Side of Israel" could not be more timely...It deserves wide attention as a profoundly human story, thoughtful and funny and unafraid.' Times Literary Supplement

`This is a powerful, readable and courageous book.' Tablet

Susan Nathan was born in England and brought up for the most part in apartheid-era South Africa, where she strongly opposed the system. An AIDS counsellor in London, she decided in her fifties - recently divorced and with grown-up children - to take up the Jewish right of return and move to Israel. This is her first book.

GOR002579941
The Other Side of Israel: My Journey Across the Jewish/Arab Divide by Susan Nathan
Susan Nathan
Used - Very Good
Paperback
HarperCollins Publishers
2006-06-19
320
0007195117
9780007195114
N/A
Book picture is for illustrative purposes only, actual binding, cover or edition may vary.
This is a used book - there is no escaping the fact it has been read by someone else and it will show signs of wear and previous use. Overall we expect it to be in very good condition, but if you are not entirely satisfied please get in touch with us.