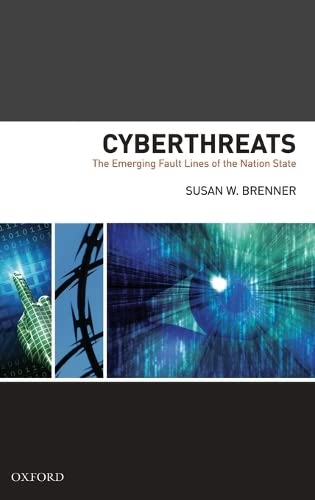 As new technologies develop, terrorist groups are developing new methods of attack by using the Internet, and by using cyberspace as a battlefield, it has become increasingly difficult to discover the identity of attackers and bring them to justice. The seemingly limitless boundaries of cyberspace has allowed virtually anyone to launch an attack from a remote and anonymous location. But once these attacks occur, it raises several important questions; who should respond, and how?; how should nation-states effectively deal with a cyber-attack?; and will the United States and other nation-states be able to survive in a world where virtual boundaries are limitless? In Cyberthreats: The Emerging Fault Lines of the Nation State Susan Brenner gives a thorough explanation of how military and law enforcement personnel respond to these attacks and why bringing cyber-terrorist to justice can be difficult and sometimes impossible.

Susan Brenner is the NCR Distinguished Professor of Law and Technology at the University of Dayton School of Law. A renowned cybercrime scholar, Professor Brenner has been invited to speak internationally and domestically at meetings including the First International Conference on Legal, Security, and Privacy Issues in Hamburg, and the American Bar Association's National Cybercrime Conference. She also chairs the Security Incident Working Group for the ABA's Privacy and Computer Crime Committee. Susan Brenner is the author of Law in the Era of 'Smart' Technology (OUP, 2007).

GOR010744199
Cyber Threats The Emerging Fault Lines of the Nation State by Susan W Brenner
Susan W Brenner
Used - Very Good
Hardback
Oxford University Press Inc
2009-01-16
320
0195385012
9780195385014
N/A
Book picture is for illustrative purposes only, actual binding, cover or edition may vary.
This is a used book - there is no escaping the fact it has been read by someone else and it will show signs of wear and previous use. Overall we expect it to be in very good condition, but if you are not entirely satisfied please get in touch with us.