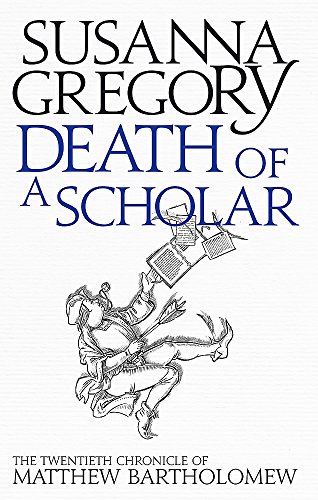 Death of a Scholar
by Susanna Gregory

Death of a Scholar Summary

Death of a Scholar: The Twentieth Chronicle of Matthew Bartholomew by Susanna Gregory

In the summer of 1358 the physician Matthew Bartholomew returns to Cambridge to learn that his beloved sister is in mourning after the unexpected death of her husband, Oswald Stanmore. Aware that his son has no interest in the cloth trade that made his fortune and reputation, Oswald has left the business to his widow, but a spate of burglaries in the town distracts Matthew from supporting Edith in her grief and attempting to keep the peace between her and her wayward son.

As well as the theft of irreplaceable items from Michaelhouse, which threatens its very survival, a new foundation, Winwick Hall, is causing consternation amongst Matthew's colleagues. The founder is an impatient man determined that his name will grace the University's most prestigious college. He has used his wealth to rush the construction of the hall, and his appointed Fellows have infiltrated the charitable Guild founded by Stanmore, in order to gain the support of Cambridge's most influential citizens on Winwick's behalf.

A perfect storm between the older establishments and the brash newcomers is brewing when the murder of a leading member of the Guild is soon followed by the death of one of Winwick's senior Fellows. Assisting Brother Michael in investigating these fatalities leads Matthew into a web of suspicion, where conspiracy theories are rife but facts are scarce and where the pressure from the problems of his college and his family sets him on a path that could endanger his own future...

Customer Reviews - Death of a Scholar

Death of a Scholar Reviews

The plotting is as razor sharp as ever, but it's the droll wit that elevates this historical over the dozens of others this British author has penned * Publishers Weekly *

Susanna Gregory was a police officer in Leeds before taking up an academic career. She has served as an environmental consultant, worked seventeen field seasons in the polar regions, and has taught comparative anatomy and biological anthropology.

She is the creator of the Matthew Bartholomew series of mysteries set in medieval Cambridge and the Thomas Chaloner adventures in Restoration London, and now lives in Wales with her husband, who is also a writer.

GOR006870717
Death of a Scholar: The Twentieth Chronicle of Matthew Bartholomew by Susanna Gregory
Susanna Gregory
Chronicles of Matthew Bartholomew
Used - Very Good
Paperback
Little, Brown Book Group
2015-06-04
464
0751549762
9780751549768
N/A
Book picture is for illustrative purposes only, actual binding, cover or edition may vary.
This is a used book - there is no escaping the fact it has been read by someone else and it will show signs of wear and previous use. Overall we expect it to be in very good condition, but if you are not entirely satisfied please get in touch with us.