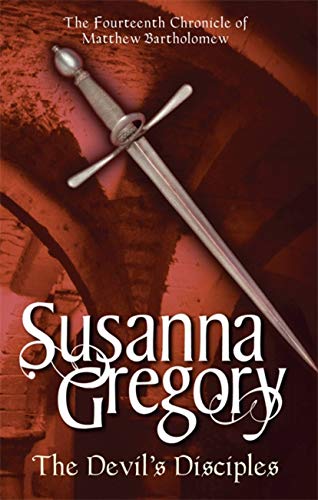 The Devil's Disciples
by Susanna Gregory

The Devil's Disciples: The Fourteenth Chronicle of Matthew Bartholomew by Susanna Gregory

Rumours of plague threaten Cambridge again, ten years after the Black Death had almost laid waste to the town. Neither the church nor its priests had defended people from the disease and now they turn elsewhere for protection, to pagan ritual and magical potions. It is a ripe atmosphere to be exploited by the mysterious 'Sorcerer', an anonymous magician whose increasing influence seems certain to oust both civil and church leaders from power. One murder, another unexplained death, a font filled with blood, a desecreated grave - all bear the hallmarks of the Sorcerer's hand, only the identity of the magician remains a mystery. A mystery which Matthew Barthlomew must solve before he loses his reputation ... and his life.

As usual, Gregory's impeccable research comes shining through, along with the humour and wit of her protagonists * Mystery Women *

Susanna Gregory was a police officer in Leeds before taking up an academic career. She has served as an environmental consultant, worked seventeen field seasons in the polar regions, and has taught comparative anatomy and biological anthropology.

She is the creator of the Matthew Bartholomew series of mysteries set in medieval Cambridge and the Thomas Chaloner adventures in Restoration London, and now lives in Wales with her husband, who is also a writer.

GOR001420298
The Devil's Disciples: The Fourteenth Chronicle of Matthew Bartholomew by Susanna Gregory
Susanna Gregory
Chronicles of Matthew Bartholomew
Used - Very Good
Paperback
Little, Brown Book Group
2009-06-04
496
0751539147
9780751539141
N/A
Book picture is for illustrative purposes only, actual binding, cover or edition may vary.
This is a used book - there is no escaping the fact it has been read by someone else and it will show signs of wear and previous use. Overall we expect it to be in very good condition, but if you are not entirely satisfied please get in touch with us.