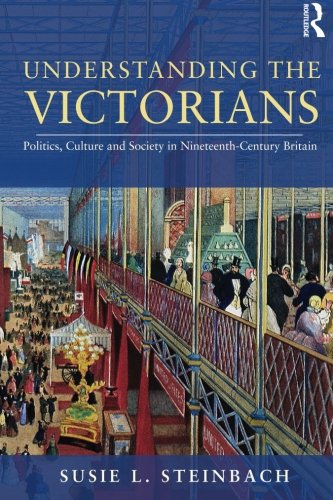 The Victorian era was a time of dramatic change. During this period Britain ruled the largest empire on earth, witnessed the expansion of democracy, and developed universal education and mass print culture. Both its imperial might and the fact that it had industrialised and urbanised decades before any other nation, allowed it to dominate world politics and culture in many ways for the better part of the nineteenth century.

Understanding the Victorians paints a vivid portrait of the era, combining broad survey with close analysis, and introduces students to the critical debates taking place among historians today. It encompasses all of Great Britain and Ireland over the whole of the Victorian period, giving prominence to social and cultural topics alongside politics and economics and emphasising class, gender, and racial and imperial positioning as constitutive of human relations. Starting with the Queen Caroline Affair in 1820 and coming right up to the start of World War I in 1914, Susie L. Steinbach uses thematic chapters to discuss and evaluate politics, imperialism, the economy, class, gender, the monarchy, arts and entertainment, religion, sexuality, religion, and science. Steinbach also provides three much-needed chapters on topics rarely covered at this introductory level on space, consumption, and the law.

With a clear introduction outlining the key themes of the period, a detailed timeline, and suggestions for further reading, this is the ideal companion for all students of the nineteenth century.

"A big fresco of the Victorian years, Susie Steinbach's volume depicts the culture, the lifestyles, as well as the social and political interactions that characterised an era when Great Britain was the most powerful nation in the world." - Ricerche di Storia Politica

"Understanding the Victorian by Susie L. Steinback...fills in the blanks of standard texts by looking at the period (ca. 1820-1914) topically with chapters on living space, consumption, class, gender, arts and entertainment, sexuality, religion, and science...I can wholeheartedly recommend Understanding the Victorians as required reading for studens and a useful read for their instructors or for anyone interested in the period." - Barbara Brandon Schnorrenberg, Anglican and Episcopal History

Susie L. Steinbach teaches at Hamline University. She is the author of Women in England 1760-1914: A Social History and has written widely on Victorian history, with a particular emphasis on gender and the law.

`Playing on the piano-forte': Introduction. 1. A `green and pleasant land' of cities and slums: Space. 2. `Discussions on the subject of Reform': Politics. 3. `By Jingo!': Imperialism. 4. `Unrivalled by any other country on the globe': the Economy. 5. `Bristling with shops': Consumption. 6. `Born into the lower-upper-middle': Class. 7. `A common cause with all the females in this kingdom': Gender. 8. `The head of the dignified part of the constitution': Monarchy. 9. `The court was crowded all day': Law. 10. `Good, murderous melodramas': Arts & Entertainment. 11. Marriage, free love, and `unnatural crimes': Sexuality. 12. `Begin and end with the Church whatever you do between-whiles': Religion. 13. Vestiges and Origins: Science.

GOR005910520
Understanding the Victorians: Politics, Culture and Society in Nineteenth-Century Britain by Susie L. Steinbach (Hamline University, USA)
Susie L. Steinbach (Hamline University, USA)
Used - Very Good
Paperback
Taylor & Francis Ltd
2011-12-05
312
0415774098
9780415774093
N/A
Book picture is for illustrative purposes only, actual binding, cover or edition may vary.
This is a used book - there is no escaping the fact it has been read by someone else and it will show signs of wear and previous use. Overall we expect it to be in very good condition, but if you are not entirely satisfied please get in touch with us
Trustpilot