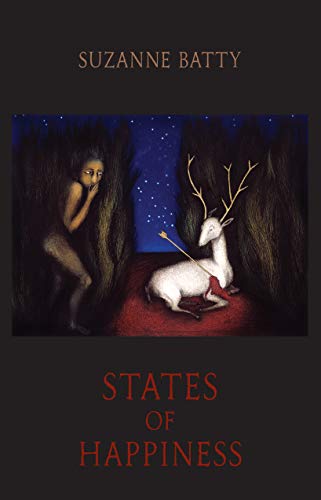 States of Happiness
by Suzanne Batty

States of Happiness by Suzanne Batty

States of Happiness, Suzanne Batty's second full-length collection, begins with an extended sequence written in memory of her twin sister. This explores their relationship from shared birth to her twin's early death from Friedreich's ataxia, a rare degenerative disease. Suzanne Batty's gifts of empathy and imagination combine to produce a profoundly moving elegy telling the hidden story of growing up as the "well" twin and exploring the meaning of illness and wellness in the light of her own experiences. The collection as a whole extends her range and probes more deeply her primary concerns - the uncertainty and necessity of love and the drive to find meaning and healing through the medium of language. The search for states of happiness, no matter how fleeting, is at the heart of this collection. These are poems which move from the everyday to the visionary, in which the physical world reflects changing emotional and perceptual states. Anarchic and sensuous, they fearlessly encounter both beauty and darkness, enabling a new and deeper connection with the world.

Reading these tour-de-force poems is to encounter shadow-wonders and brilliant terrors, often drawn from the molten core of childhood, its fury and rue. Here is extraordinary witness in poems that recall the work of Janet Frame in their confronting both of mental anguish and the transformations that are the hard won and healing reward for the descent into such perilous depths. States of Happiness is distinguished by its implacable grace. It invites us '"to lie down in Samuel Beckett's boat, your arms full of lilies". -- Penelope Shuttle
Suzanne Batty's States of Happiness is an extraordinary collection that explores mental anguish. It begins with a complex sequence of poems in memory of her twin sister, who died of a rare degenerative disease. Though the book is dark and disturbing, it is also filled with chinks of light. The poems are as compelling as any thriller and full of insight and empathy. -- Jackie Kay * The Guardian (Books of the Year 2018) *

Suzanne Batty has published two pamphlets with smith|doorstop books, Shrink (1997) and Thirty at Thirty (2016), and two book-length collections with Bloodaxe, The Barking Thing (2007) and States of Happiness (2018). She won the Poetry Society's Anne Born Prize in its inaugural year, 2015. She studied for an MA in Creative Writing at Sheffield Hallam University and subsequently became a lecturer there. She has collaborated with musicians, visual artists, photographers and printmakers, and uses creative writing to support people experiencing and recovering from extreme mental distress. She lives in Manchester.

GOR009833652
States of Happiness by Suzanne Batty
Suzanne Batty
Used - Very Good
Paperback
Bloodaxe Books Ltd
2018-09-27
96
1780374267
9781780374260
N/A
Book picture is for illustrative purposes only, actual binding, cover or edition may vary.
This is a used book - there is no escaping the fact it has been read by someone else and it will show signs of wear and previous use. Overall we expect it to be in very good condition, but if you are not entirely satisfied please get in touch with us.