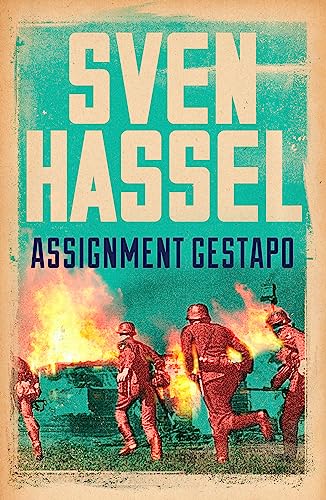 Used Price
$22.49
inc. GST
Free Shipping in Australia
A sobering portrait of the absurdity of the Nazi regime and the atrocities committed by Hitler's secret police, now relaunched with a stunning new look.
Very Good

A sobering portrait of the absurdity of the Nazi regime and the atrocities committed by Hitler's secret police. 'Frighteningly vivid, a most strongly felt piece of writing.' IRISH TIMES After months of fighting a savage war on the Eastern Front, the 27th Penal Regiment - men considered little more than criminals - are joined by German reserves. A garrison has been attacked and occupied by Russian troops. The German soldiers have been slaughtered. Sven Hassel and his comrades are ordered to get behind Russian lines and massacre those responsible. But this is only the beginning...Because then the orders change: the regiment are sent to Hamburg, where their next assignment is guard duty for the mercilessly cruel Gestapo...

He is graphic, at times brilliantly so, but never brutal or bitter. He is, too, a first-rate storyteller--WASHINGTON POST
In essence this is an expose of the absurdity of war, and a moving plea for peace. As such, it takes its rank with far milder books, such as ALL QUIET ON THE WESTERN FRONT--NEWSDAY

Born in 1917 in Fredensborg, Denmark, Sven Hassel joined the merchant navy at the age of 14. He did his compulsory year's military service in the Danish forces in 1936 and then, facing unemployment, joined the German army. He served throughout the Second World War on all fronts except North Africa. When the war ended in 1945 he was transferred between Russian, American and French prison camps, and upon returning to Denmark, was sentenced to 10 years in prison for treason. He began writing LEGION OF THE DAMNED during his time as a prisoner of war. His 14 Second World War books, which draw on his own encounters and experiences as a soldier, have sold over 53 million copies worldwide and have been published in more than 50 countries. He peacefully passed away in Barcelona in 2012, where he had resided since 1964.

GOR007737195
Assignment Gestapo by Sven Hassel
Sven Hassel
Sven Hassel War Classics
Used - Very Good
Paperback
Orion Publishing Co
2014-06-19
352
1780228082
9781780228082
N/A
Book picture is for illustrative purposes only, actual binding, cover or edition may vary.
This is a used book - there is no escaping the fact it has been read by someone else and it will show signs of wear and previous use. Overall we expect it to be in very good condition, but if you are not entirely satisfied please get in touch with us.