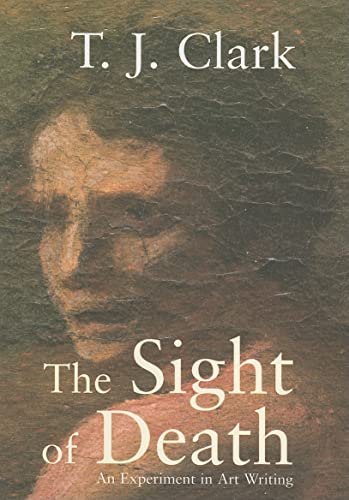 The Sight of Death
by T. J. Clark

Out of Stock
$37.99
inc. GST
Addresses questions such as: Why do we find ourselves returning to certain pictures time and again? What is it we are looking for? And how does our understanding of an image change over time?
Good
Only 0 left

The Sight of Death Summary

The Sight of Death: An Experiment in Art Writing by T. J. Clark

A renowned art historian confronts the specific powers of painting, and the hold of the visual image on the viewer's imagination

Why do we find ourselves returning to certain pictures time and again? What is it we are looking for? How does our understanding of an image change over time? In his latest book T. J. Clark addresses these questions-and many more-in ways that steer art writing into new territory.

In early 2000 two extraordinary paintings by Poussin hung in the Getty Museum in a single room, Landscape with a Man Killed by a Snake (National Gallery, London) and the Getty's own Landscape with a Calm. Clark found himself returning to the gallery to look at these paintings morning after morning, and almost involuntarily he began to record his shifting responses in a notebook. The result is a riveting analysis of the two landscapes and their different views of life and death, but more, a chronicle of an investigation into the very nature of visual complexity. Clark's meditations-sometimes directly personal, sometimes speaking to the wider politics of our present image-world-track the experience of viewing art through all its real-life twists and turns.

The Sight of Death Reviews

". . . as compelling as a thriller...Clark shows that this [book] really is the merest doorway to what is ultimately a truly sublime mystery."-John McEwan, The Tablet

". . . an eloquent plea for a new way of experiencing and talking about art."-BBC Radio 3 Nightwaves website

"What's important about this book is simply that it takes 'inexhaustibility' seriously. ... The Sight of Death is a characteristically mobile text - lucid, dogged, swankily sophisticated, intractably self-conscious, humorous, agonised, driven. ... And the whole argument of this book, naturally, is that the thought isn't simply there to be grasped. It unfolds through steady and repeated acts of looking. That is how pictures operate, when they do well. They ask you back."-Tom Lubbock, The Independent

". . . intended as an antidote to a culture in which images thrive but are instantly consumed and forgotten. It's almost a detective story as Clark pieces together the evidence derived from repeated looking... Clark's account is proof that some works really do deserve this kind of scrutiny, and that close attention to things is an adventure."-Andrew Mead, Architects Journal
"[An] absorbing book . . . Part (muted) autobiography, part critique of his profession as an art historian - and more than anything else a rapt account of what it is to look attentively and inattentively and still be able to think politically - Clark has written a book about loss of attention and the possibilities of its recovery. . . . There is a strange meditative suspense about what is going to be revealed by Clark's unfussy scrutiny of the pictures. The plain subtlety of the writing and the beautiful reproductions throughout...make the experience of reading the book akin to the process Clark is describing. . . . It is not incidental that at a time when there is more visual art than ever before, most writing about the visual arts is either mind-numbingly pretentious and cliquey or boringly descriptive and without vision. Clark's book could not be more timely."-Adam Phillips, The Observer
"Part of this is a revolt against the present-day dominance of the moving image, and partly a rebuke to the so-called elitism of pure contemplation. The result is wonderfully dynamic, and . . . relevant in ways that could not have been foreseen. . . . [Clark] is as far removed from comfortable connoisseurship, with its usual signifiers, as it is possible to be, yet what is internalised and noted is rigorously true to what the painter intended the viewer to apprehend. . . . What it proves - and this is entirely acceptable - is that the best antidote to reading is looking. . . . Forget blockbuster exhibitions: this is the way to see pictures."-Anita Brookner, The Spectator
"An original and outstanding book. You might think [Clark] would not have enough to say. Or that if he had, it would be about himself or his reading. But he has more than enough, and none of it is indulgently subjective or interpretively pat. . . . Without jargon, Clark records what he notices, what questions remain hanging, what stirs his sympathy and imagination. ... It does not give the end away to say he reaches few conclusions. His is an open-ended back-and-forth, almost an imaginary conversation with the painter. Tidy formulas would betray the spirit of his experiment. He writes as someone who finds it urgent to bring out and show off reticent objects of love, rather than as a connoisseur or teacher. . . . The Sight of Death [is] a powerful vindication of close looking on its own terms."-Edmund Fawcett, RA Magazine
"Clark's book is either the most pretentious nonsense ever written or a work of genius. But which?...he surely is right to want to debunk the old myth that images reveal themselves in a single, highly charged moment. The Sight of Death is a sustained attack on what Clark calls the 'visual flow'. The more images that come at us - be they ads, or magazine covers, or reproductions of famous paintings - the more necessary it becomes 'to suggest what is involved in truly getting to know something by making a picture of it: to state the grounds for believing that some depictions are worth retuning to."-Rachel Cooke, The Observer
"A revelatory exercise in art criticism."-Matthew Sweet, The Independent on Sunday

T. J. Clark is George C. and Helen N. Pardee Chair at the University of California, Berkeley, and author of several books including the highly influential volume, The Painting of Modern Life: Paris in the Art of Manet and his Followers.