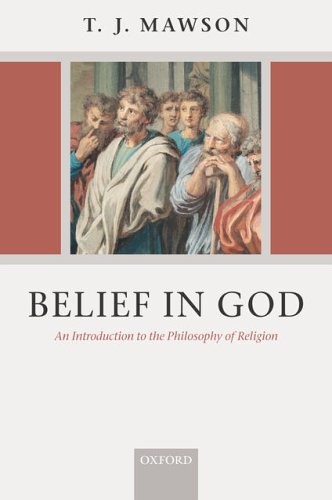 Out of Stock
$66.99
inc. GST
Providing an introduction to the philosophy of religion, this book offers coverage of the key issues, from ideas about God's nature and character to arguments for and against His existence. It is suitable as a text for beginning undergraduate courses, and useful for those thinking about these important questions.
Very Good
Only 0 left

Belief in God: An Introduction to the Philosophy of Religion by T. J. Mawson (St Peter's College, University of Oxford)

Belief in God answers two questions: what, if anything, is it that Jews, Christians, and Muslims are agreeing about when they join in claiming that there is a God; and what, if any, prospects are there for rationally defending or attacking this claim? In the context of a sustained argument for particular answers to these questions, Tim Mawson tackles many of the most prominent topics in the philosophy of religion. He argues that those who believe that there is a God are best interpreted as believing that there is a being who is essentially personal, transcendent, immanent, omnipotent, omniscient, eternal, perfectly free, perfectly good, and necessary; and non-essentially creator of the world and value; revealer of Himself; and offerer of everlasting life. Having explored the meaning and consistency of this conception of God in the first half of the book, Mawson goes on to consider whether or not belief or the absence of belief in such a God might be the sort of thing that does not rationally require argument and, if not, what the criteria for a good argument for or against such a God's existence might be. Having established some criteria, he uses them to evaluate specific arguments for and against the existence of such a God. He looks at the Argument to Design; the Cosmological Argument; the Ontological Argument; the Argument from Religious Experience; the Argument from Apparent Miracles; the Problem of Evil; and Pascal's Wager. Finally, he explores the relation between faith and reason. In the course of his argument, Mawson makes striking new claims and defends or attacks established positions in new ways. His conversational style, lively wit, and enlightening examples make Belief in God as pleasurable as it is instructive and thought-provoking. It makes an ideal text for beginning undergraduate courses and for anyone thinking about these most important of questions.

Anyone working in the analytical tradition of philosophy of religion, at any level, would find something of interest in the book: both as teaching material (I know from experience how much students enjoy some of the experiments), and as a contribution in its own right. * Philosophy *
a lively and engaging introduction to the philosophy of religion...makes some significant contributions to contemporary debates in the subject, and which will provide a great deal of discussion among those working in this field ... his style is contagiously enthusiastic ... Mawson has presented a provocative and stimulating argument concerning the nature and existence of God * Brian Clack, Ars Disputandi *
The conversational and relaxed style, as of a good undergraduate supervision, full of lively illustrations in the form of little parables, appeals. But the discussion moves to a higher level than the commendation suggests, and T.J. Mawson voices interesting and provocative thoughts. * Times Literary Supplement *

THE CONCEPT OF GOD ; THE EXISTENCE OF GOD ; FAITH