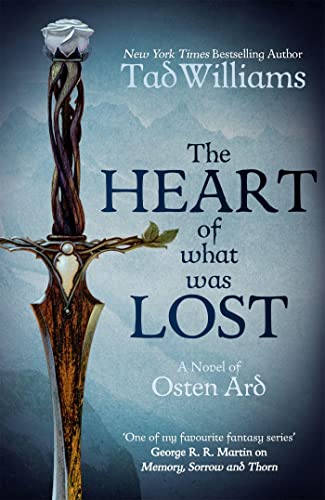 The Heart of What Was Lost
by Tad Williams

The Heart of What Was Lost Summary

The Heart of What Was Lost: A Novel of Osten Ard by Tad Williams

The world was nearly destroyed, but now knows hope again. At the end of Memory, Sorrow, and Thorn, Ineluki the Storm King, an undead spirit of horrifying, demonic power, came within moments of stopping Time itself and obliterating humankind.

He was defeated by a coalition of mortal men and women joined by his own deathless descendants, the Sithi. In the wake of the Storm King's fall, Ineluki's loyal minions, the Norns, retreat north to Nakkiga, an ancient citadel which holds a priceless artefact known as The Heart of What Was Lost.

They are pursued by the army of Duke Isgrimnur who is determined to wipe out the Norns for all time.
The two armies will soon clash in a battle so strange and deadly, so wracked with dark enchant-ment, that it threatens to destroy not just one side but quite possibly all.

Customer Reviews - The Heart of What Was Lost

The Heart of What Was Lost Reviews

Without Tad Williams there would be no Game of Thrones. * Guardian *
Fans of Tad Williams will delight in this new addition to his work - new readers could not have a better introduction. * Daily Mail *
This is gritty, gripping fantasy with heart and guts, and we can't wait to read more. * Sci Fi Now *

Tad Williams is a California-based fantasy superstar. His genre-creating (and genre-busting) books have sold tens of millions worldwide, in twenty-five languages. His considerable output of epic fantasy and science fiction book-series, stories of all kinds, urban fantasy novels, comics, scripts, etc., have strongly influenced a generation of writers: the Otherland epic now plays as an MMO on steam.com. Tad is currently immersed in the creation of The Last King of Osten Ard, planned as a trilogy with two intermediary novels. He, his family and his animals live in the Santa Cruz mountains in a suitably strange and beautiful house.

GOR008695820
The Heart of What Was Lost: A Novel of Osten Ard by Tad Williams
Tad Williams
Memory, Sorrow & Thorn
Used - Very Good
Paperback
Hodder & Stoughton
2017-06-29
256
1473646650
9781473646650
N/A
Book picture is for illustrative purposes only, actual binding, cover or edition may vary.
This is a used book - there is no escaping the fact it has been read by someone else and it will show signs of wear and previous use. Overall we expect it to be in very good condition, but if you are not entirely satisfied please get in touch with us.