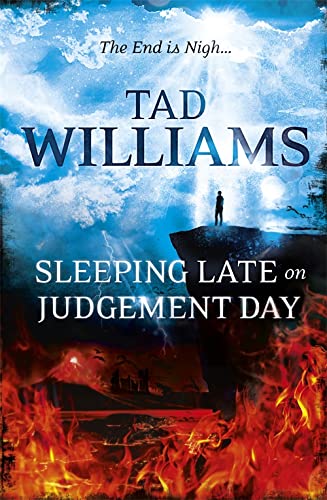 Bobby Dollar thinks he's seen it all - after all, he's been to Hell and back again. Literally.

But he has another thing coming. Sleeping Late on Judgement Day will find Bobby back in his adopted hometown of San Judas, California, trying to stay out of trouble... and failing. His love life is still a mess, there are one too many people who have it out for him, and drowning his sorrows in a nice glass of whisky won't keep the demons at bay forever.

Bobby's going to have to pull himself together and make a few tough decisions before time runs out. The problem is, time could run out at any moment. In the final Bobby Dollar novel in Tad Williams' groundbreaking epic fantasy trilogy, fallen angel Bobby Dollar will finally be force to confront the one problem he can't talk his way out of: his own.

Praise for THE DIRTY STREETS OF HEAVEN:

'When I heard that Tad Williams was writing an urban fantasy novel, I got all tingly. Now I've read it, and it's even better than I'd dared to hope. It's snarky, fast-paced, and above all, original. You should be tingly, too.'

* Patrick Rothfuss *
'Tad Williams' ... famous four-book trilogy was one of the things that inspired me to write my own seven-book trilogy. [ I ] said, "My god, they can do something with this form," and it's Tad doing it.' * George R.R. Martin *
'This is urban fantasy at its best.' * EpicBookReviews *
'A very promising start to an exciting new series from one of our greatest modern F/SF authors.' * Geek Syndicate *
'Readers who enjoy Neil Gaiman's Neverwhere, Kate Griffin's A Madness of Angels, Jim Butcher's Dresden Files will most likely be as entertained as I was... Highly recommended.' * SFF World *

Tad Williams is a California-based fantasy superstar. His genre-creating (and genre-busting) books have sold tens of millions worldwide, in twenty-five languages. His considerable output of epic fantasy and science fiction book-series, stories of all kinds, urban fantasy novels, comics, scripts, etc., have strongly influenced a generation of writers: the Otherland epic now plays as an MMO on steam.com. Tad is currently immersed in the creation of The Last King of Osten Ard, planned as a trilogy with two intermediary novels. He, his family and his animals live in the Santa Cruz mountains in a suitably strange and beautiful house. @tadwilliams @mrstad

GOR006089304
Sleeping Late on Judgement Day: Bobby Dollar 3 by Tad Williams
Tad Williams
Used - Very Good
Hardback
Hodder & Stoughton General Division
2014-09-09
448
1444738658
9781444738650
N/A
Book picture is for illustrative purposes only, actual binding, cover or edition may vary.
This is a used book - there is no escaping the fact it has been read by someone else and it will show signs of wear and previous use. Overall we expect it to be in very good condition, but if you are not entirely satisfied please get in touch with us.