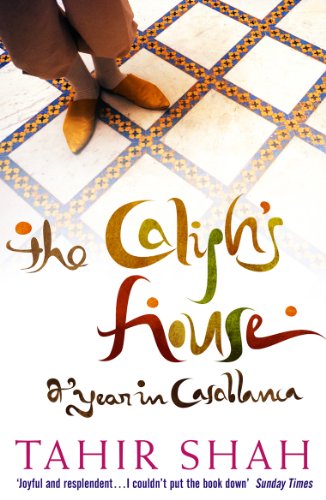 The Caliph's House
by Tahir Shah

In Stock
$20.49
inc. GST
Tells the story of Tahir Shah, a writer and film-maker in his 30s, married, with two children, who was beginning to wilt under British city life. Woven into the narrative is the author's own journey of self-discovery, of learning about a grandfather he hardly knew, and of coming to love the multi-faceted, contradictory country that is Morocco.
Very Good Good Well Read
8 in stock

The Caliph's House by Tahir Shah

Look into the eyes of a jinn and you stare into the depths of your own soul... Writer and film-maker Tahir Shah - in his 30s, married, with two small children - was beginning to wilt under brash, cramped, ennervating British city life. Flying in the face of friends' advice, he longed to fulfil his dream of finding a place bursting with life, colour, history and romance - somewhere far removed from London - in which to raise a family. Childhood memories of holidaying with his parents, and of a grandfather he barely knew, led him to Morocco and to 'Dar Khalifa', a sprawling and, with the exception of its jinns, long-abandoned residence on the edge of Casablanca's shanty town that, rumour had it, once belonged to the city's Caliph. And so begins Tahir Shah's gloriously vivid, funny, affectionate and compelling account of how he and his family - aided, abetted and so often hindered by a wonderful cast of larger-than-life local characters: guardians, gardeners, builders, artisans, bureacrats and police (not forgetting the jinns, the spirits that haunt the house) - returned the Caliph's House to its former glory and learned to make this most exotic and alluring of countries their home. The Caliph's House is a story of home-ownership abroad - full of the attendant dramas, anxieties and frustrations - but it is also much more. Woven into the narrative is the author's own journey of self-discovery, of learning about a grandfather he hardly knew, and of coming to love the magical, multi-faceted, contradictory country that is Morocco.

"A wonderfully entertaining book - Tahir Shah's talent is to make you laugh while you are admiring the insights given by his most original and lively view of life." -- DORIS LESSING
"Funny, moving, fast-paced and thoughtful, it confirms Shah as one of the best travel writers of his generation...a rich mosaic of a book as intricate, complex and beautiful as the Arabian Nights world it describes" -- JASON WEBSTER
"Reading about restoring houses overseas can be as tedious as watching paint dry...yet I can't fault this joyful and resplendent addition to the genre. Shah writes without artifice or condescension, his language is fluent and direct. His characters leap off the page...I couldn't put the book down." -- RORY MACLEAN * SUNDAY TIMES *
"A book full of charm and humour, elevated by a consistent sense of the beauty and mystery of everyday life. What also shines through the narrative is the author's decency and respect for the people and the cultures he encounters, the sort of qualities we like to think of as fundamentally British ...a tribute to our potential for understanding and learning to live with irreconcilable differences" * GUARDIAN *
"Shah...with good humour and wit...gives a vivid evocation of the spirit of the place...The Caliph's House is charmingly escapist, and combines the pleasures of good property porn with those of the best travel writing" -- DAILY TELEGRAPH

Tahir Shah was born into an Anglo-Afghan family, with roots in the mountain stronghold of the Hindu Kush. Shah's ten books have chronicled a series of fabulous journeys. He lives with his wife and two children in Casablanca. Visit his website: www.tahirshah.com

GOR001241122
The Caliph's House by Tahir Shah
Tahir Shah
Used - Very Good
Paperback
Transworld Publishers Ltd
2007-01-29
368
0553816802
9780553816808
N/A
Book picture is for illustrative purposes only, actual binding, cover or edition may vary.
This is a used book - there is no escaping the fact it has been read by someone else and it will show signs of wear and previous use. Overall we expect it to be in very good condition, but if you are not entirely satisfied please get in touch with us.