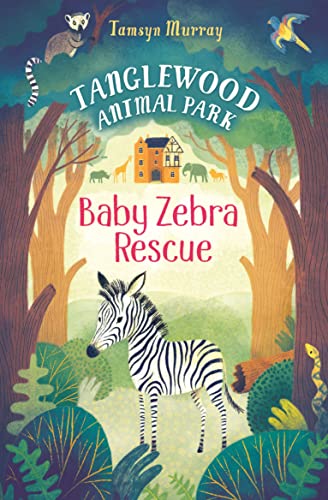 In Stock
$15.49
inc. GST
Zoe loves living at Tanglewood Animal Park! Every day Zoe takes care of the animals. She splashes with penguins, feeds the lemurs - she even sees baby zebra, Flash, being born. It's a dream come true. Then Flash goes missing. Now Zoe has to find him, and soon! Where can that baby zebra be?
Very Good
8 in stock

Zoe's dreams of becoming an animal-keeper look set to come true when her family take over the running of Tanglewood Animal Park! But Oliver, the park vet's son, is used to having Tanglewood to himself, and he's not happy to be sharing it. Then disaster strikes when the park's newest arrival, baby Zebra Flash, escapes from his paddock just before the park's grand reopening. Can Oliver and Zoe join forces and rescue the missing baby zebra so Tanglewood can open in time? Wild animal adventures await inside the gates of Tanglewood in this brand- new series bursting with furry, feathery fun!

Tamsyn Murray is the author of the hilarious Completely Cassidy series, in which eleven-year-old Cassidy is searching for her special talent. Tamsyn's special talents include performing onstage, being able to lick her own elbow, and writing many books for young readers, including the Stunt Bunny series, and Tanglewood Animal Park. Tamsyn lives in Hertfordshire with her daughter, her son, five rabbits, one dog, one cat and one husband.

GOR007749086
TangleWood Animal Park (1): Baby Zebra Resue by Tamsyn Murray
Tamsyn Murray
TangleWood Animal Park
Used - Very Good
Paperback
Usborne Publishing Ltd
2016-07-01
176
1474903037
9781474903035
N/A
Book picture is for illustrative purposes only, actual binding, cover or edition may vary.
This is a used book - there is no escaping the fact it has been read by someone else and it will show signs of wear and previous use. Overall we expect it to be in very good condition, but if you are not entirely satisfied please get in touch with us.