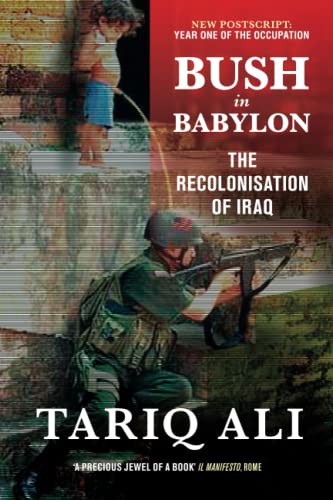 Bush in Babylon
by Tariq Ali

Bush in Babylon: The Recolonisation of Iraq by Tariq Ali

This invasion and occupation of Iraq by the United States and Britain - with retrospective sanction of this recolonisation by the United Nations - marks a turning point in world history and a renewal of the two-hundred-year-old war waged by the North against the South. Whatever the final outcome, the assault and capture of Iraq by the American Empire and its bloodshot British adjutant - and the resistance it provoked - will shape the politics of the twenty-first century. In this passionate and provocative book, Tariq Ali argues against the view that sees imperialist occupation as the only viable solution to bring about the regime-change in corrupt and dictatorial states. The American Empire, like all its predecessors, acts primarily out of self-interest. Now, as before, it is the political, economic and strategic needs of the United States that determine its foreign policy. Bush in Babylon is above all a history of the Iraqi resistance against empires old and new. Imperial interventions in the past created a layer of collaborators who could only be removed via a revolution; but the tragedy of Iraq is also self-inflicted. The radical colonels, courageous communists and burnt-out Ba'athists failed to establish a stable and just democratic republic, thus enabling a return visit by imperialism. Like the author's previous work, The Clash of Fundamentalisms, this book presents a magnificent cultural history; a heartfelt homage to the great poets of Iraq and the Arab world whose influence remained strong throughout their periods of exile, and who are united in poetic resistance to the latest catastrophe. "Why are otherwise intelligent people in Britain and the United States surprised on learning that the occupation is detested by a majority of Iraqi citizens? Empires sometimes forget who they are crusading against and why, but the occupied rarely suffer from such confusions. How could they when the regime being imposed on them is a mixture of Gaza and Guantanamo? The aim of the resistance is to target the occupation forces on a daily scale and in this they have been relatively successful. The replacement of US soldiers by blue-helmeted UN mercenaries is unlike to improve the situation. Ultimately the local jackals and their masters will fail."

"The charm of stylish dissent: less Chomsky, more poetry. Empires may come and go but Tariq Ali, the rebel who has lost the streets but gained the ghettos, is here to stay, to fight on ... Buy his spirit."--India Today

"Caustic warnings run through Bush in Babylon: The Recolonisation of Iraq by Tariq Ali ... who criticises pro-American academic and media apologists for stressing that Bush's policies are 'the only way to stabilise the world' ... undeniably passionate."--Financial Times

"A precious jewel of a book."--Il Manifesto, Rome

"Hard facts, sharp political analysis and literary insertions that evoke the richness of Arab culture ... unlikely to soothe the middle-class nerves of our harmony-seeking 'Gutmenschen.'"--Suddeutsche Zeitung

"Tari Ali ... has poured all his caustic verve and literary talent into this essay on the modern history of Iraq. Drawing on the work of great Arab historians, but also on personal testimony and the works of different Iraqi poets, he reconstitutes the principal moments of a tragic history--a pitiless dissection of the lies used by the Anglo-American leaders to legitimate their recent imperial expedition in Iraq."--Le Monde Diplomatique

"A strikingly erudite tour of Iraqi and Middle Eastern history and, at points, a survey of the work of secular-nationalist Arabic poets such as the Syrian Nizar Qabbani and the Iraqi exile Mudhaffar al-Nawab."--Philadelphia City Paper

"An often compelling insider's perspective--with some valuable insights into the sensitivities that explain why the occupying coalition in Iraq is not being treated as a savior."--New York Times Book Review

Tariq Ali is a writer and film-maker. He has written over a dozen books on world history and politics, five novels, and scripts for both stage and screen. He is an editor of New Left Review and lives in London.

GOR002876823
Bush in Babylon: The Recolonisation of Iraq by Tariq Ali
Tariq Ali
Used - Very Good
Paperback
Verso Books
2004-07-28
214
1844675122
9781844675128
N/A
Book picture is for illustrative purposes only, actual binding, cover or edition may vary.
This is a used book - there is no escaping the fact it has been read by someone else and it will show signs of wear and previous use. Overall we expect it to be in very good condition, but if you are not entirely satisfied please get in touch with us.