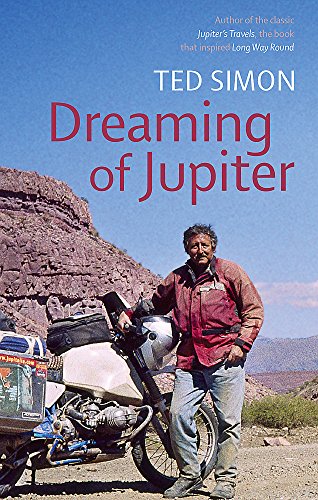 Dreaming Of Jupiter
by Ted Simon

Used Price
$21.49
inc. GST
Free Shipping in Australia
* The sequel to the classic travel book JUPITER'S TRAVELS, which sold over half a million copies and was the inspiration for the LONG WAY ROUND trip
Like New Very Good Good Well Read

Dreaming Of Jupiter by Ted Simon

Ted Simon is the author of the classic travel book JUPITER'S TRAVELS. It documents his four-year journey round the world by motorbike, travelling through Europe, Africa, South and North America, and Asia. A number one bestseller in the late 1970s, it is still regarded as one of the greatest motorcycle books - indeed, one of the greatest travel books - ever written.
In 2001, at the age of 69, Ted Simon decided to retrace his journey, and DREAMING OF JUPITER is the result. It took him two and a half years - during which time he revisited all the countries he had travelled through in the 1970s. He found much had changed, and he reflects upon the increased poverty, political upheavals, environmental issues and indeed the changes in himself.
But ultimately, DREAMING OF JUPITER is a hugely inspiring read with a positive message at its heart - that even at the age of 70 you can still set off on an adventure, and be surprised and excited by what life throws at you along the way.

Gloriously luminescent, but always self-deprecating. Simon's physical powers are diminishing, but his writing just gets better. The wonderful portraits of the people he encounters, often redolent of Bruce Chatwin, are sometimes so enticing that, were this a movie, you'd swear they were a plant for later on * OBSERVER *
This book has barely left my side in the past few days. It is, by turns, sad, funny and immensely uplifting * TELEGRAPH *
A trip of dreams - and Ted Simon has done it twice . . . a terrific read * RTE GUIDE *
He was on the road for three years, and his new book, Dreaming of Jupiter, is a compelling account of the adventures en route, including breaking a leg in the middle of a vast plain in Ethiopia; a reunion with a camel rider he'd met 25 years before in Eg * SAGA MAGAZINE *

Ted Simon was raised in London, studied chemical engineering but went to Paris where he fell into journalism. He has ridden twice around the world on a motorcycle, and published five books on travel and other matters. He now lives in northern California. He has one son.

GOR010167086
Dreaming Of Jupiter by Ted Simon
Ted Simon
Used - Like New
Paperback
Little, Brown Book Group
2008-04-03
448
0349119600
9780349119601
N/A
Book picture is for illustrative purposes only, actual binding, cover or edition may vary.
The book has been read, but looks new. The book cover has no visible wear, and the dust jacket is included if applicable. No missing or damaged pages, no tears, possible very minimal creasing, no underlining or highlighting of text, and no writing in the margins.